Ramiro Musotto was acclaimed as one of the most innovative berimbau players in the world. A lifelong student of musical styles, Musotto has kept the pulse alive for Latin American folk music, carnival samba, Brazilian pop, and, as a young man, behind a drum kit for a punk band. Born in Argentina, he moved to Brazil in his early 20s to perfect his technique in playing the berimbau, a single-string percussion instrument. Using the skills he honed as a percussionist for Brazilian standouts Caetano Veloso, Gilberto Gil, Marina Lima, Marisa Monte, Sergio Mendes, and Carlinhos Brown, Musotto set out to fuse the musical origins of the region with his passion for electronica.

Musotto has been called a shaman and a pioneering spirit in the current Brazilian music scene, known amongst his peers as both an accomplished eletronic musician and percussionist. Venturing beyond the ethnic field recordings and electronic sequencing, Musotto also draws from a wealth of unique percussion and other organic sound samples that make his beat structure as diverse and far-reaching as the African rhythms that brought the berimbau to Brazil and finally to Musotto himself.

His debut 2003 release SUDAKA, was a gathering between Amazon Indian chant field recordings, Afro- Brazilian Candomblé spirit rituals, the call of an Aegentinean urban street vendor, and Musotto's own urbanized electronic beats. With his second release CIVILIZACAO & BARBARYE (Circular Moves), Ramiro promises to build on his trademark sound of original and innovative music. To listen to the music of Ramiro Musotto is to hear a glimpse of the future sound of South America. 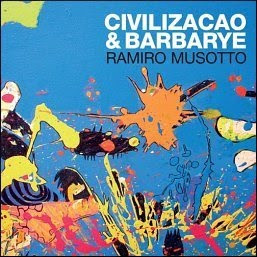 Posted by Arnaldo DeSouteiro at 9:43 AM

Ramiro Musotto was one of my top influences in Brazilian music. I am in total shock right now. I just found out. My most heartfelt condolences to his family and bandmates. What a talent!!!

I was blessed to see Ramiro perform in Rio de Janeiro with Lenine's band in 1998 and have followed his work ever since. Ramiro was a total master of the berimbau and had a great sound on the instrument. When it came to finding the right sound for the song, Ramiro was the most creative Brazilian percussionist I ever heard. (Check out his water chops on Lenine's Live in Cite DVD.) His records were brilliant. No one has done a better job combining electronica with natural percussion. On his album Sudaka, the Ramiros percussion blends flawlessly with the MPC loops and samples. To the casual listener it sounds like its all sequenced but there is a TON of live percussion playing on the record. It is flawless. Dear God I will miss Ramiro!!!!
Dann Sherrill, Nashville, TN