Monika Herzig discovers "Peace on Earth" is more than a dream 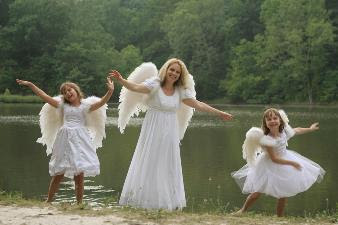 The journey to musical success wasn't easy for Monika Herzig. Armed with just a suitcase, guitar and a cup full of dreams, Monika and her guitarist Peter Kienle, immigrated to the US from Germany on a one-year student exchange program in August 1988. Virtually penniless, the full-time adventurers figured if they could just make it to America (the "land of jazz," as Monika called it) they'd be able to have a fair chance at a career in the music they loved. With one way tickets, they crossed their fingers, boarded the plane and hoped for the best.

Monika and Peter began raising funds by baking bread for friends. After a lot of hard work, their dreams paid off in the form of accolades and significant concert dates to include the prestigious Down Beat Magazine Award for her composition "Let's Fool One." Monika would also be awarded her Doctorate in Music Education and Jazz Studies from Indiana University, where she is presently a faculty member.

As a touring jazz artist, Monika Herzig has performed at many prestigious jazz clubs and festivals, such as the Indy Jazz Fest, Cleveland's Nighttown, Louisville's Jazz Factory, the W.C.Handy Festival, Jazz in July in Bloomington and Cincinnati, Columbus' Jazz & Rib Fest, to name just a few. Groups under her leadership have toured Germany, opened for acts such as Tower of Power, Sting, the Dixie Dregs, Yes, and more.

In addition to numerous recordings with the fusion group BeebleBrox, she has produced four albums as leader of the Monika Herzig Acoustic Project. What Have you Gone and Done was voted one of the 10 best recordings of 2007 by indymusic.com. Her latest recording, "Peace on Earth", released locally in 2008 will be formally released for worldwide distribution November 2009 under the Owl Studios label.

From spiritual "Go Tell It on the Mountain" to "Happy Xmas (War is Over)" by John Lennon, "Peace on Earth" is a seasonal mixture that infuses traditional acoustic jazz with contemporary sensibilities. Featuring a sprinkling of originals by Herzig, "Peace on Earth" interweaves a pleasing tapestry that echoes familiarity, while being technically engaging enough to entice the listener to delve deeper. By resisting the urge to record a full album of covers and expanding the arrangements beyond the standard seasonal fare, Peace on Earth yields enough swing to please even the most finicky jazz connoisseur.

The artistic merit of "Peace on Earth" expands beyond the arrangements. Unification of the human spirit is at the central core of the work. "All of us are human beings with the same aims. We are trying to find a place on earth that makes us happy and trying to find a way to live together in a meaningful way. The holidays are probably the time when we get closest to those goals . . . but we should live that way all year long," said Herzig.

For more information on this artist, please visit www.monikaherzig.com or http://blog.owlstudios.com/blog/monika-herzig

Peace on Earth will be available for purchase November 3, 2009 at www.owlstudios.com and outlets worldwide.
Posted by Arnaldo DeSouteiro at 8:59 AM