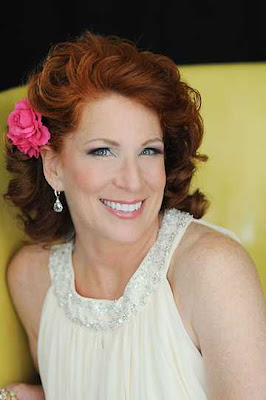 CD Release Event at Yoshi's San Francisco
Sunday, November 1
************
For the last five years, San Francisco jazz and blues vocalist Pamela Rose has been investigating the music of women songwriters -- particularly those of the Tin Pan Alley and classic blues eras -- in her dynamic live shows. Both she and her audiences responded strongly to the repertoire, but Rose was surprised to realize that "even though we love and revere these songs, we don't know the writers' names."

Determined to bring these women and their contributions into the limelight, Pamela Rose has recorded a revelatory new CD that will not only spread the word about these writers, but should prove to be a breakthrough work for Rose herself.

Wild Women of Song: Great Gal Composers of the Jazz Era is the captivating new CD that reports back on Rose's musical explorations and captures her sumptuous alto in peak form. The new disc, her fifth, will be released October 13 on her own label, Three Handed Records, and was produced by Grammy Award winner Leslie Ann Jones. Arrangements were handled by saxophonist/pianist Matt Catingub, former musical director for the jazz singer (and his mother) Mavis Rivers.

Songwriting was the primary occupation of seven of the CD's "gal composers": Bernice Petkere (represented here by "Close Your Eyes"), Doris Fisher ("That Ole Devil Called Love," recorded in 1946 by Billie Holiday), Dana Suesse ("My Silent Love"), lyricist Dorothy Fields ("A Fine Romance," "I'm in the Mood for Love"), Kay Swift ("Can't We Be Friends"), Vee Lawnhurst/Tot Seymour ("And Then Some," a 1935 hit for Ozzie Nelson), and Maria Grever ("What a Diff'rence a Day Made," a big hit in the US by Dinah Washington and later on, in the mid-70s, by Esther Phillips, in a "disco" version that topped the dance charts also all over Europe).

Three of the writers were full-time singers who penned some of their own material -- Peggy Lee ("I Don't Know Enough About You," used by Diana Krall as the final number in all her concerts since the last ten years), Alberta Hunter ("Down Hearted Blues"), and Ida Cox ("Wild Women [Don't Have the Blues"]). And Pamela Rose herself carries the tradition into the present century with three original compositions ("I'm Not Missing You," "Bruised Around the Heart," "If You're So Special"). "The writing process has always fascinated and engaged me," says Rose.

Pamela Rose grew up a block from the Troubadour, the West Hollywood nightclub that was the incubator for L.A.'s early-1970s emerging singer-songwriter scene. "I just about lived there," she recalls, "and witnessed this wonderful explosion when all the singer-songwriters were blooming." She performed her "very emo songs" on amateur nights at the club.

Her first big break came courtesy of Merl Saunders, who hired her for an East Coast tour in 1977. "Merl got me to understand that the key to music is the groove," Pamela says. "He taught me so much about improvising and using the band as your instrument."

Rose continued to work in blues and soul contexts through the 1980s, but after the birth of her daughter (now 20) she started exploring the American Songbook standards she'd heard her mother sing while growing up. Her 1993 album On the Jazzy Side of Blue was nominated for two BAMMIE Awards, and the follow-up, Every Time I'm With You, was critically acclaimed and led to several European tours.

You Could Have It All (2001) was a soul-jazz session featuring B-3 players Wayne De La Cruz and Tony Stead, and Just for a Thrill (2006) launched her musical partnership with guitarist Danny Caron, who co-wrote two of the new CD's originals. (Guitarist Mimi Fox collaborated with Rose on the third.) All of Rose's CDs have been issued on her own imprint, Three Handed Records.

The concept behind Wild Women of Song has thoroughly energized Pamela Rose -- not only as a challenging musical endeavor, but as an ongoing cultural history project. She's created a web site (www.wildwomenofsong.com) filled with fascinating details about the women represented on the disc. And she envisions her CD release show at Yoshi's San Francisco, on Sunday, November 1, as a multimedia event that tells the story of these women through music, visuals, and narrative -- adding new elements to Rose's always-electrifying performances. "This has been by far the most creatively satisfying project I've ever been associated with," she says. "I can't wait to introduce folks to these gals!"
*********
Pamela Rose
Wild Women of Song: Great Gal Composers of the Jazz Era
(Three Handed Records)

Pamela Rose performing "I Don't Know Enough About You":
http://www.youtube.com/watch?v=_EdDnzXZrl4

Posted by Arnaldo DeSouteiro at 10:45 AM