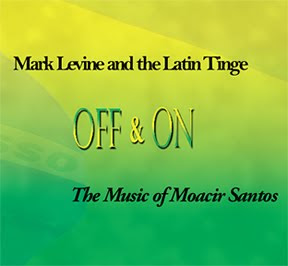 Grammy-nominated pianist Mark Levine was introduced to the music of Moacir Santos in the late 1960s, when he had the good fortune to work with that giant, one of Brazil's greatest composers, arrangers and (the best) baritone saxophonist ever. Now Levine is releasing a tribute album in Santos's memory on his own Left Coast Clave label.

The new CD, "Off & On: The Music of Moacir Santos," made with Levine's Afro-Caribbean ensemble The Latin Tinge, is scheduled for release on September 15. "This is something I've wanted to do for 35 years," says Levine. "Moacir is the greatest Brazilian songwriter of the 20th century, and he is emphatically not just about bossa and samba. In fact, the new album is Brazilian music played with an Afro-Cuban slant. A lot of the arrangements are pure rumba clave."

It's interesting to see how people have different perspectives about some facts. On his notes for the CD booklet, Levine states that, although Moacir Santos recorded three albums for Blue Note in the 70s, he lived in total obscurity. "It was not until the early 2000s, when Moacir was nearing the end of his long and productive life, that the world started to take notice. For that, we mostly have to thank two Brazilian musicians and record producers, Zé Nogueira and Mario Adnet, who rescued Moacir from undeserved obscurity with some superb CDs and DVDs," he says.

Ironically, it was through the Blue Note albums, that I and many of my friends in Brazil discovered the music of Moacir Santos. I vividly remember the joy I had when, back in 1974, when I was 11 years old, I listened to some songs from his BN debut, "The Maestro," which were receiving airplay on the JB-AM, then the best radio station in all over Brazil. A couple of days later, I started to try to buy a copy. It was sold-out at both Modern Sound and Billboard stores, but I finally was able to find a domestic pressing in a shop called Symphony (at Santa Clara Street in Rio de Janeiro). Yes, even to my own surprise, "The Maestro" - which featured people like Frank Rosolino, Joe Pass, John Heard, Harvey Mason and the underrated vocalist Sheila Wilkinson Smith - had been released in Brazil by the Copacabana label.

"The Maestro" was the only Moacir Santos album available in his native Brazil during the 70s, the 80s and 90s. His previous album, the legendary "Coisas," recorded in 1965 for the small Forma label founded by Wadi Gebara with producer Roberto Quartin working as its A&R man, soon went out-of-print and became an impossible-to-find collectors' item. To the point that most of Moacir's fans only listened to that masterpiece for the first time when it was reissued on CD in 2004 by the independent label MP,B which had licensed it from Universal, which had bought Forma catalogue but had no interest in releasing it. (A similar thing happened when I, Arnaldo DeSouteiro, licensed Eumir Deodato's debut album, "Inútil Paisagem," and reissued it on CD on my own JSR [Jazz Station Records] label, with Universal just doing the distribution)

It's also funny to note that, although Moacir's second LP for Blue Note, "Saudades," was never released in Brazil, it was through that album that I became aware of such musicians as the great LA-based Brazilian percussionist Mayuto Correa, trumpeter Steve Huffstetter (that later went to prominence with the Toshiko Akiyoshi-Lew Tabackin Orchestra), fantastic reedman Ray Pizzi and pianist Marc Levine, who played mostly Fender Rhodes electric piano throughout the album. And what Rhodes! Btw, it's the only thing I miss on this beautiful "Off & On" project; although Levine plays acoustic piano with notable impeccability, I still think that a Fender Rhodes would be more appropriate to some of the tracks, specially the originally funky-oriented tunes. Not to mention that Levine's original Rhodes solo on "A Saudade Mata A Gente" (the only song on both "Saudade" and "Off & On" that wasn't composed by Moacir, but by Antonio Almeida & João de Barro) was outstanding. For my personal taste, the Rhodes could have added more variety to the CD, not only in sonority as well as in moods & instrumentation, leading it to other roads.

Despite this pun and my personal opinion, Marc Levine succedded in taking Moacir Santos' songbook to the latin-jazz territory. "I was inspired by Moacir's approach, and this recording makes no attempt to be authentic in a cultural sense," he properly explains.

But I disagree when Levine states that Moacir's Blue Note albums "were Brazilian music played as played by Jazz musicians, not Brazilian jazz." Actually, "The Maestro," "Saudade" and "Carnival of the Spirits" were no "authentic Brazilian music" at all. Thanks God! They were albums that resulted from the fusion of Brazilian and jazz elements in the same proportion, with Santos fortunately showing no prejudice for funky grooves on tunes like "Nanã," "Mother Iracema," "Kermis" and the spaced-out "The Mirror's Mirror." In this sense, "The Maestro" remains also a masterpiece of what Hermeto Pascoal calls "universal music."

"Off & On," co-produced by Levine and Bud Spangler in Berkeley, California, reunites a fiery quintet, featuring John Wiitala's solid propulsion on bass, Paul van Wageningen on drums, the extraordinaire Michael Spiro on percussion (not only playing the typical Brazilian instruments, but also the timbales to reinforce the latin-tinge) and Mary Fettig, whom I met in 1985 when she toured Brazil with Airto & Flora Purim, having recorded a TV special for which I wrote the screenplay and did the whole supervision. "Maria Madalena Fettig," that's how Flora used to introduce her on stage!

Here on Levine's album, Fettig mostly plays flute, but moves to the soprano sax on such songs as "Kathy" and "Tomorrow Is Mine," as well as uses the bass clarinet on "Suk-Cha" to play the original part recorded by Ray Pizzi on the bassoon on "Saudade." Btw, it ranks among the most terrific bassoon performances in the jazz history, along with Michael Rabinowitz's solo on "Wolverine Blues" (from Charles Mingus' "Epitaph") and the soon-to-be-released Daniel Smith's "Blue Bassoon" album.

I still would like to add that, despite the incontrovertible importance of Nogueira and Adnet in resurrecting Moacir Santos while he was still alive, obviously making him very happy, more people contributed to rescue Moa from obscurity. Among them, a certain Arnaldo DeSouteiro. Not only I constantly praised Moacir for over three decades in my writing for newspaper and mags, but also often included his tunes in albums and compilations I produced over the years, starting with the first version of "Kathy" recorded with Portuguese lyrics by singer Yana Purim on her debut album for RCA back in 1982. Three years later, I offered a lunch to Moacir and Radamés Gnatalli in my home in Rio, when both were invited to perform at the first Free Jazz Festival. And much later, around 1998, when producing such best-selling compilation series as "A Trip to Brazil" (Verve) and "Brazilian Horizons" (Milestone), just to name a few, I have included recordings of "Nanã" that were done by Moacir to his own "The Maestro" and Kenny Burrell's "Both Feet on the Ground," respectively. At that time, many people, including famous jazz reviewers from the USA and Europe, asked me: "Who's this guy, Moacir Santos?" Now Marc Levine helps me to explain.
*********
Press-release:
"Off & On" is the fourth recording by the Latin Tinge, formed by Levine in the late 1990s and featuring the dazzling rhythm section tandem of Paul van Wageningen on trap drums and Michael Spiro on hand percussion; bassist John Wiitala; and Brazilian-jazz veteran Mary Fettig on reeds. The album opens with what is probably Santos's best-known composition, "Nanã," as a boogaloo, while the rest of the album, Levine says, is "pretty faithful to Moacir's arrangements," even with the unmistakable Latin tinge.

"Every time I play this CD for someone, they get up and dance," says Bay Area music veteran Bud Spangler, who co-produced the date with Levine. "This is the sixth project that I've produced with Mark and my favorite by far. Dan Feiszli, our engineer, is also a first-class bassist and understands the music. We knew we had something special from day one and really tried to make it sound special, too." 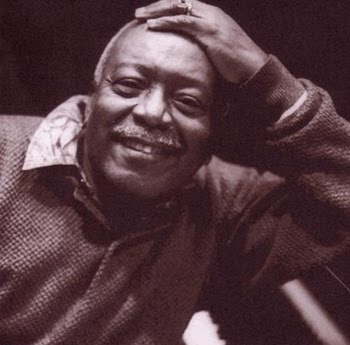 Moacir Santos (1926-2006, pictured above) was born in the rural northeastern state of Pernambuco, Brazil, and came to Los Angeles in 1967 seeking work as a film composer. Levine met him in the late 1960s and did some local gigs with him, and was later invited to play on Santos's 1974 Blue Note album "Saudade," one of three dates the composer made for that label. They failed to find an audience. It was toward the end of his life that Santos's music achieved wider recognition through the efforts of producers Mario Adnet and Zé Nogueira, who organized the critically acclaimed albums "Ouro Negro" (2002) and "Choros & Alegria" (2005).

"I think Moacir is truly a world musician," says Levine, "in that he's able to combine all sorts of different things together. There's a tremendous amount of layering in his music. Even though Brazilian music and Cuban music both came from the same part of Africa, obviously they evolved differently in Brazil and in Cuba. So we've got a combination of three different types of Western hemisphere music with an African background -- Brazilian, Afro-Cuban, and jazz. To me, that's the essence of world music: different genres of music combined to form essentially a new genre." 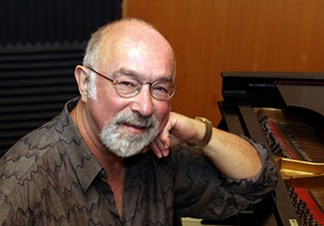 Based in the Bay Area since 1974, Mark Levine currently divides his time between the Bay and Boise, Idaho. As the author of the best-selling instruction manuals "Jazz Piano Book" and "Jazz Theory Book" (Sher Publications), and as a founding faculty member of the Jazzschool in Berkeley, Levine has a national reputation as a distinguished music educator. In addition to his prodigious Latin-jazz explorations (with his own groups and with Mongo Santamaria, among others), Mark has an equally impressive mainstream jazz résumé, having worked with artists including Joe Henderson, Stan Getz, Bobby Hutcherson, Harold Land, Blue Mitchell, and Woody Shaw.

Earlier this year, Levine released a straight-ahead trio session - "Exact Change" (Jazzschool Records) - with bassist Peter Barshay and drummer Mike Clark. But his primary focus now, with the release of "Off & On" is the music of Moacir Santos, and he is hopeful that the new CD will be instrumental in bringing Santos's musical genius to the attention of the American public.

Mark Levine & the Latin Tinge will be performing the material from "Off & On" at Senzala in Sunnyvale, CA on 9/12 and at the Jazzschool in Berkeley on 9/20. A West Coast tour is planned for the fall.

A video about the making of "Off & On":
http://www.youtube.com/watch?v=s0sgZDuvRbo