http://www.philharmonie.lu/en/events/events.php?seite=event_details&id=1244&PHPSESSID=mhpaqgjcmfjs6llp7otohtn2n1
(click on the above link to watch a lovely slide show) 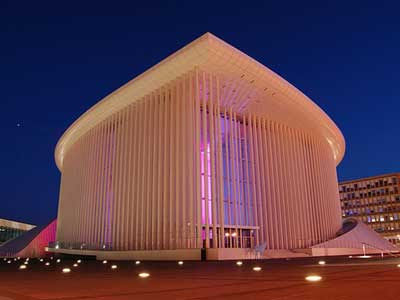 "We would be missing so much without music! Music is a vast Garden of Eden with plateaus, dark forests, mysterious jungles, exciting nooks and crannies, and intoxicating depths; and with the number of individual pathways within it bordering on the infinite, it is as wide-ranging as the world itself – yet always fresh! In this way, music carries within it an element of primordial humanity.

Described on the following pages is what you might be missing, if there were no Philharmonie. In its fifth season, the Salle de Concerts Grande-Duchesse Joséphine-Charlotte abides by its exceptional artistic standards and brings many of the very best musicians, ensembles, and orchestras to Luxembourg. The Orchestre Philharmonique du Luxembourg and its principal conductor, Emmanuel Krivine, together with the Solistes Européens, the Orchestre de Chambre du Luxembourg, as well as numerous other artists from the region – all contribute to enlivening the musical activities of the land.

Supported by your enthusiasm, we have assembled the artistic line-up for the fifth season with great joy and have sought out the most exciting artistic impulses in the most diverse genres for a wide variety of target audiences. I trust you will find your personal «grand evening» among them and look forward to seeing you in the Philharmonie.

Posted by Arnaldo DeSouteiro at 10:05 AM