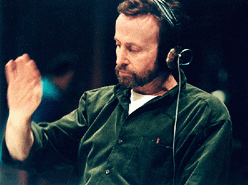 "I wanted to play an instrument I could kiss."

Johnny Mandel was 12 years old when he first put his lips to a trumpet, a New York City kid crazy about the radio, his head filled with dreams of being in the big bands.

So what. Every other crackerjack kid in the five boroughs wanted to be in the big bands in 1937. But Mandel made it, and how.

By the time he was 25, Mandel had played trumpet and trombone with everyone from Joe Venuti to June Christy to Count Basie; and from Buddy Rich to Woody Herman and Artie Shaw.

He spun all that sound into a long career as a composer and arranger, and it's in that role that the writer of the "M*A*S*H" theme ("Suicide is Painless") and other classics comes to The College of Saint Rose on Saturday.

The occasion is "Music and Memories -- An Evening with the Legendary Johnny Mandel," and the program will feature performances of Mandel's music by Sherrie Maricle and the DIVA Jazz Orchestra, along with celebrated vocalist Ann Hampton Callaway.

Mandel has nothing but praise for the DIVAs, and he's a discerning critic of modern music and its players.

As noted, in the '30s and '40s, the trumpet was simply a key to un lock the door of the music business for Mandel. He didn't like school, and by his tweens he'd already figured out that he didn't like many of the arrangements he heard pouring out of the little speaker on the family Philco.

So he set about learning his craft the hard way -- by doing it.

"There weren't any books that told you how to be an arranger at that time," the 83-year-old Mandel says in a recent telephone interview.

He scored a gig studying with the great Van Alexander, and was soon making his own charts, finally releasing the sound in his head.

"There's no way you can learn this other than to write the music and have someone play it so you can hear it. It's not like making a painting where you can see what you're doing. You have to hear it."

And Mandel wasn't the only one to hear it. Once he relocated to the West Coast in the mid-1950s, Mandel was arranging recording sessions for the likes of Frank Sinatra, Peggy Lee, Mel Torme, Jo Stafford, Tony Bennett, Chet Baker and Andy Williams.

"I wish I could have worked with Sinatra more," he whispers.

Mandel also found his way into film, scoring "The Americanization of Emily," "The Sandpiper," "M*A*S*H*," "Being There" and "The Russians Are Coming, The Russians Are Coming" among others. Mandel's contributions to the American standards canon include "The Shadow of Your Smile," "Emily," "Where Do You Start?" and "Close Enough for Love."

At Saint Rose, Mandel will reminisce about his life in music, but he'll also conduct the DIVA band, showing that his first love is still strong. And while you can be sure you'll hear some classics, don't expect much by way of contemporary music.

Mandel doesn't much care for the world of "American Idol" and format radio. He makes that very clear.

"I think it's a dismal world when 'American Idol' becomes the arbiter of good taste in the world of music. It's gone as low as you can go. It seems like it's going to have to get better, but don't ask me how, I have no idea."

"I don't want to sound like an old person, but it just used to be a whole lot better. Music is made by amateurs now and not by professionals and that's all encouraged. 'American Idol' is an amateur show, that's all it is. It seems almost like professional is a dirty word these days."

Mandel, though, is nothing if not a seasoned pro.

When he's done in Albany, he'll head back West, where he's working on getting all of his old war stories where they belong.

"Oh, I have so many memories," he says. "I'm having a book written to tell them all."
Posted by Arnaldo DeSouteiro at 7:02 AM