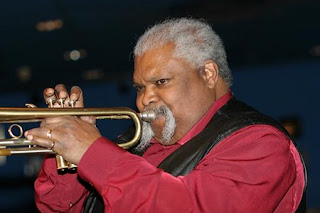 Join us for an exciting musical evening this coming Tuesday evening, May 12 when Trumpet Great Ted Curson brings his dynamic ensemble to the John Birks Gillespie Auditorium in the New York City Baha'i Center at 53 East 11th Street (between University Place & Broadway). This evening Ted Curson’s ensemble features Michael Cochrane on Piano, Gordon Lane on Drums, Toivo Unt on Bass, Lenny Argese on Guitar, Enrico Granafei on Harmonica, and Daoud David Williams on Percussion. There will be 2 shows at 8:00 and 9:30 p.m.

An outstanding and flexible trumpeter, Ted Curson is well-known for his work with Charles Mingus’ quartet (which also included Eric Dolphy and Dannie Richmond). He studied at Granoff Musical Conservatory; moved to New York in 1956; played in New York with Mal Waldron, Red Garland, and Philly Joe Jones; and recorded with Cecil taylor (1961). After the 1959-60 Mingus association (which resulted in some classic recordings), Curson co-led a quintet with Bill Barron (1960-65), played with Max Roach, and led his own groups. He spent time from the late ‘60s on in Europe (particularly Denmark) and then returned to the US in 1976. Ted Curson has led sessions for Old Town (1961), Prestige, Fontana, Atlantic, Arista, Inner City, Interplay, Chiaroscuro, and several European labels.

A dogmatic approach to playing one’s own way that has marked the work of his mentors - Mingus, Miles, Dolphy and Cecil - is what defines Curson’s incredibly difficult to pinpoint approach, one that seems to hit every adjective in the book while harping on none. At present he has over 20 solo albums to his credit. He is sought after as a music instructor and is in demand for jazz clinics and concerts at universities and music schools throughout the world.