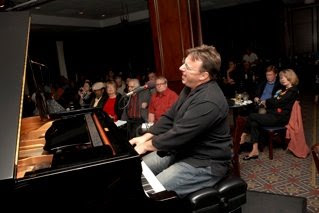 In the fall of 2008, Bill Champitto entered and won The Dimock Center’s Steppin’ Out with the Stars Talent Search, which put him on the main stage alongside the great Lalah Hathaway at Boston’s most anticipated annual fundraising gala for the Dimock Center. This gave a powerful push to his career.

Champitto is now scheduled to perform at Scullers Jazz Club on Tuesday, May 12 at 8:00 p.m. In conjunction with his appearance, Bill will also release a funky new CD entitled "Bounce" highlighted by some of the soulful, jazz influenced tunes Bill sang and performed at the talent competition. The new disc will celebrate Bill’s full “bounce back to his first love, music.”

Tickets at $20.00 each can be purchased on line via www.ticketweb.com, at www.scullersjazz.com or by calling Scullers directly at 617-562-4111. For more information, call: 617-562-4111. Scullers is located on the second floor in the DoubleTree Guest Suites Boston [400 Soldiers Field Road, Allston]; the club is wheelchair accessible.

Champitto’s band will feature Bill himself on keyboards and vocals, Ricardo Monzon on African and Latin percussion, Andrew [Nez] Nesbitt on drums and Keith Kirkpatrick on bass.

Bill Champitto is a fiery Boston-based singer/songwriter/pianist and Hammond B3 organist whose music was aptly defined by an ardent web fan as “Soul, Funkified Jazz.” Originally from Troy, New York, Bill started playing keyboards by ear at age 15 when two of his closest friends received a drum set and a guitar for Christmas gifts and he decided to join them in their musical endeavors.

Bill devoured everything by ear--taping tons of music and wood-shedding until he got it right. He even convinced the pastor of the local St. Jude Catholic Church to allow him to practice on the church's big Hammond B3. “The nuns would chase me away, but the pastor was cool with it. I’d learn Santana solos on this organ and rock out the otherwise tranquil church,” says Bill.

Champitto had great ears, no doubt and he quickly earned an audition with a local club band. “Music saved my life. At the time I was hanging out in an area surrounded by lots of drugs and gangs and such, but music took me in another direction.”

Being self-taught, Bill picked up everything he could from the wide variety of the players he worked with, including jazz standards, jazz fusion, reggae, Southern rock, blues, alternative rock and Latin styles. “My first real gig was in a club on Troy's then undeveloped Hudson River waterfront, called Sutter’s Mining Company. I had just landed a gig with a seven piece band named Stage where the seven of us split the cover charges from the door! I was 15 years old performing in this packed club but what I remember most was being served drinks by waitresses that wore nothing under their unbuttoned black leather vests. It was very educational!”

Stage lasted in the greater Albany/Troy/Syracuse area for several years, and after a breakup in '78, transformed into a band called Click. Click was a high-energy band that toured extensively and at one time opened for Spyro Gyra as well as Santana. The well-rehearsed, tight cover band performed all the great late ‘70s material from Tower of Power, Earth, Wind & Fire, Chicago, Blood Sweat & Tears and the like. Bill was rocking the band out with his powerhouse vocals and keyboard skills from the late ‘70s to the early ‘80s.

“We were a show band performing five-40-minute sets a night for six nights a week, then packing up and traveling to a new city to do it again. It was an insane schedule, but I had a blast and learned a lot.”

In 1981, wanting to learn as much as possible about the music he loved, Bill moved to Boston to attend Berklee College of Music. There he studied with well-known, highly regarded musicians such as pianist Bob Winter, pianist/arranger Ray Santisi, trumpet player Greg Hopkins and trombonist/arranger/bandleader Phil Wilson. “I jumped fully in, devoting 24/7 to the music thing and burned through the entire four-year program at Berklee in five semesters and a summer.”

Bill continued performing, launched his own band with original songs and played around Boston in well-known music haunts like Bunratty’s, The Channel, T.T. The Bear’s, The Middle East and Upstairs at Ryles. His group, Little Alex, with its original brand of pop/jazz/fusion with vocals had promises of landing a record deal. At the same time, Bill was also teaching music and still doing the IT gig until his job required him to travel, making it impossible for him to continue performing.

Despite a multi-year break from performing in the late 1990s - early 2000s, music still circulated strongly in Bill’s blood. The corporate world provided a living, but music remained his heartbeat. When Bill returned to the scene in 2005, his new band was hot enough to open for the legendary James Cotton, James Montgomery’s Blues Band, Paula Cole and others. They also performed at the Old Iron Springs Festival in Saratoga, New York and the weeklong Yankee Homecoming street festival on the waterfront in Newburyport, Massachusetts, among other events and gigs in the Northeast.

Coming full circle and listening to that musical pulse, Bill released his first full CD in 2007 on his own label. Titled "Water’s Edge," the recording is available on iTunes, Rhapsody, Napster, Amazon mp3 and other major web-based music outlets. "Water’s Edge" refers to the scenic area where he lives--Winthrop, Massachusetts, overlooking the ocean and Boston's amazing skyline.
Posted by Arnaldo DeSouteiro at 11:33 AM