Japan's most renowned and awarded jazz photographer ever, K. Abe (1929-2008) died from pneumonia at the Seikyo Hospital in Tokyo on September 17, 2008. He was 78.
"A Farewell Meeting for K. Abe" took place last December 13th at "Cafe Cotton Club" in Takadanobaba, Tokyo. More than 60 people, among jazz friends and bussiness pals, got together and paid tribute to his memory.
A few days later, "50 Jazz Greats - From Heaven," a beautiful 2009 calendar (pictured above), with text & pics by K. Abe, was released in Japan.
Many jazz fans outside Japan may not be familiar with his work, but he released some great book and, besides his collaboration with Creed Taylor's CTI Records, Abe contributed to dozens of jazz albums by such artists as Miles Davis (for the very rare "Miles! Live in Japan '81", which documents Miles' comeback to Japan on October 4, 1981), John Coltrane (as seen on the recent DVD issue "Live in 60, 61 & 65" from the Jazz Icons series), Oscar Peterson, Bill Evans, Anita O'Day, Lee Konitz, Chick Corea, Sonny Stitt, Cecil Taylor, Count Basie, Joe Henderson, Roy Ayers, Barney Kessel, Bobby Hutcherson, Gato Barbieri, Phil Woods, Ernestine Anderson, Ray Bryant, Buddy DeFranco, Roger Kellaway, Helen Merrill, the Modern Jazz Quartet, the Toshiko Akiyoshi-Lew Tabackin Big Band... The list goes on and on.
Now I'm helping to prepare a retrospective exhibition of his work to be presented next September in Tokyo, as well as hopefully in LA.
("A Farewell Meeting for K. Abe" - pic by Masanori Doi)

Born in Tokyo, on December 10, 1929 Katsuji Abe was first exposed to American popular music in the mid-Forties. While he was a student at Waseda University, in the late forties and early fifties, he performed jazz at U.S. Army and Navy camps. After graduation, he worked as a radio disk-jockey and an album cover designer, and became a self-taught photographer.

I was introduced to Abe's artistry through his great pics that Creed Taylor used in the liner covers of many CTI albums for such artists as Milt Jackson ("Sunflower"), Kenny Burrell ("God Bless The Child"), Hubert Laws ("Morning Star") and Freddie Hubbard ("Sky Dive").
Curiously, such pics were not shot during the studio sessions, but in live concerts performed by those artists in Japan. Creed once told me that he loved Abe's "straight-to-the-point pics" and that they provided a great contrast with Pete Turner's colored pics often used in the front of the CTI gatefold covers.
Oddly, when some of these CTI albums were reissued on CD, the photos taken by K. Abe were deleted from the CD booklets... even in the latest Japanese paper sleeve issue of "Sky Dive" in 2002 (an horrible reissue from the PJL label).
(liner photo from Hubert Laws' "Morning Star" LP)

K. Abe also did ALL the photos used on the three volumes of "CTI Summer Jazz at Hollywood Bowl," reissued on a 2-CD set (I have supervised the first reissue and made sure that Abe's fantastic pic that shows the musicians from the back of the stage would be preserved). Abe, Creed's top choice to document all the Japanese tours of CTI artists during the 70s, had been invited by the producer to attend that historic Hollywood Bowl concert in July 1972. 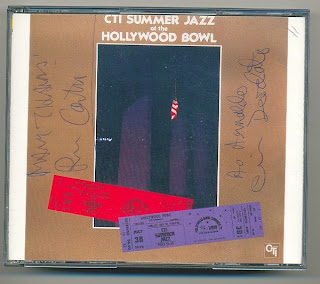 (the CTI All-Stars live at the Hollywood Bowl in '72)

Abe-san also did the album design and all liner photos for "CTI Double Deluxe", a 2-LP set released in Japan back in 1970. Its gatefold cover includes many rare pics of Creed Taylor on sessions with such artists as J.J. Johnson & Kai Winding, plus Walter Wanderley, Quincy Jones, Paul Desmond, Wes Montgomery and many others.

His work can be appreciated also on Ron Carter's "Blues Base", Hubert Laws' "Firebird" and Wes Montgomery's "Max 20" compilations.
He worked for many journals and magazines in Japan, and also published some great books there and abroad. One of them, "Jazz Giants - A Visual Retrospective", issued by Billboard Publications in 1988, was reviewed by the New York Times in December 18, 1988, when writer Tom Piazza stated: "The Japanese photographer and fan K. Abe has compiled probably the best and most satisfying book of jazz photographs ever published." 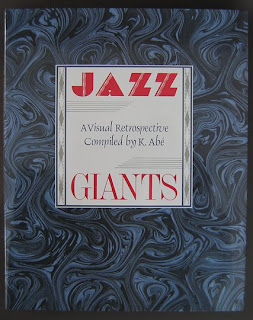 Another precious K. Abe book, "My People in Jazz", was published in 1975 by Yamate Shobo-Japan, including photos of jazz giants such as Duke Ellington, Dizzy Gillespie and John Coltrane.
(guitarist Jack Wilikins & K. Abe in 1977)
(Miles Davis, 1981, by K. Abe)

Thank you for this tribute to Abe. I was privileged for the past 30 years to call him my friend. All who knew him must agree that his outstanding talent was matched only by his great generosity, warmth and humor. One of a kind was Abe ...