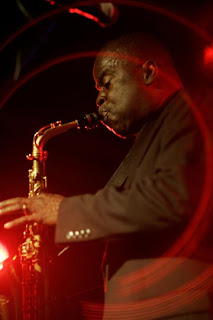 Maceo Parker & his band
Featuring Dennis Rollins
Live @ Jazz Cafe, London
Thu 21 & Fri 22 May £22.50 Adv
I was introduced to Maceo Parker's artistry through his performance on the title track from Johnny Hammond's "The Prophet" album (on Creed Taylor's Kudu label), when I was 10 years old... It remained a personal favorite performance and, in 1997, I was able to reissue it for the first time on CD when producing/compiling the "CTI Acid Jazz Grooves" album, still the best-selling CTI compilation ever released in Japan.
Born to play the saxophone, Maceo toured and recorded with James Brown for many many years (when Brown's musical director was Pee Wee Ellis, not coincidently the arranger of that Johnny Hammond track) and has longed been famed for his inventive and mesmerising stage shows. His special guest on May 21 & 22 @ the Jazz Cafe in London will be Dennis Rollins, the top trombonist in UK's jazz scene, a fiery player who was influenced by our Raul de Souza - we are clearly in for a treat!

For more details about "CTI Acid Jazz Grooves":
http://jazzstation-oblogdearnaldodesouteiros.blogspot.com/2007/04/cti-acid-jazz-grooves.html
Posted by Arnaldo DeSouteiro at 7:21 AM