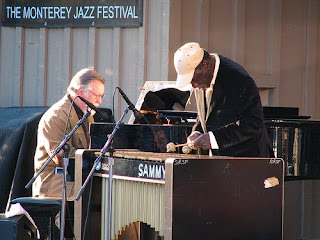 In the 1950s, the pianist and vibraphonist Charles "Buddy" Montgomery" played with the band The Mastersounds and in the 1960s with his brother, the guitarist Wes Montgomery and the Montgomery Brothers band. In 1969 he moved to Milwaukee where he helped form a local jazz initiative and gave lessons to younger musicians. In 1982 he moved to Oakland, California, founded another local jazz initiative and in 1987 organized the first Oakland Jazz Festival. He performed with Marlena Shaw, Bobby Hutcherson, Charlie Rouse and David 'Fathead' Newman. In 1994 he moved to Los Angeles. On May 14th he died from heart failure in his house in Palmdale.
My two personal favorite items, among Buddy's projects as a leader, are the two albums he recorded in the mid-80s for producer Orrin Keepnews' Landmark label, then distributed by Fantasy Records: "Ties of Love" (1986, featuring Claudio Roditi, David "Fathead" Newman, Ron Carter, John Heard, Billy Higgins, Marvin "Smitty" Smith, Ted Dunbar and vocalist Marlena Shaw) and "So Why Not?" (1988, on which he also played the Yamaha DX-7 synthesizer besides acoustic piano and vibes, supported by Ron Carter, Ralph Penland, Jeff Chambers, Jim Nichols and Santana's percussionist Orestes Vilato, among others).
Obituary:
http://www.nytimes.com/2009/05/22/arts/music/22montgomery.html?_r=2&scp=8&sq=jazz&st=nyt
Posted by Arnaldo DeSouteiro at 8:45 AM