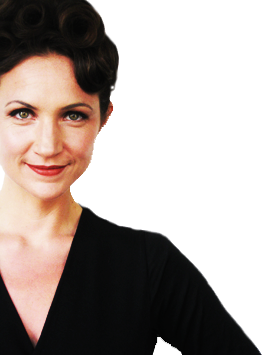 On her intriguing and amazing new CD "The German Projekt," which features jazz-imbued arrangements of classic songs by Brecht-Weill and Friedrich Hollaender and which is coming out this May, singer Andrea Fultz sounds as if she'd been born to interpret this rich, complex body of music.

But in fact the album concept came to fruition a mere three or four years ago, while she was living and studying in San Francisco and performing with musical colleagues who were interested in exploring Kurt Weill's songs with her. "The material was really completely new to me," says the Munich-born Fultz, 34, who has worked with a variety of bands ranging from American Songbook to electronica to bossa nova. "I knew the melodies, but not all the words. The dark Weill stuff was very exciting."

Joined by violinist Dina Maccabee, accordionist Rob Reich, percussionist Micha Patri, bassist Eugene Warren, and pianist Adam Shulman, whose credits include work with Stefon Harris, Paula West, and Bobby Hutcherson, Fultz began to delve into the songs and arrangements that evolved into The German Projekt. She and her band, augmented by a three-man horn section, will appear at a CD release event at Yoshi's in Oakland on Monday, May 18.

"The music has to support the lyrics and follow the stories of the songs," says Rob Reich, in speaking of the challenges of arranging The German Projekt. "And these are often heavy, dramatic stories, full of changes in tempo and harmony, and full of intense emotions. We were fortunate to be working with some very talented jazz musicians. We wanted them to have some room for interpretation and improvisation, so it was important to strike a balance between staying true to the original musical conception and allowing the songs to breathe and grow." 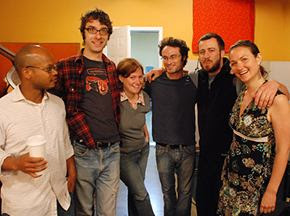 (L. to r.: Eugene Warren, Rob Reich, Dina Maccabee, Adam Shulman, Micha Patri, Andrea Fultz)
Although several Weill compositions, such as "Mack the Knife" (aka "Moritat"), "My Ship," and "September Song," have become jazz standards, most of his oeuvre remains in the cabaret or art song realm. "Alabama Song," which opens The German Projekt and is sung in English, was previously recorded by the Doors and David Bowie (whom Fultz calls "my absolute hero!"); Marianne Faithfull and Dee Dee Bridgewater have released more extensive Weill collections.
Sonny Rollins, who counts Friedrich Hollaender among his favorite composers, has recorded "Falling in Love Again" ("Ich bin von Kopf bis Fuss auf Liebe eingestellt"), the theme from The Blue Angel, and frequently performs the song in concert. (Early in his career, Rollins was fond of Hollaender's "This Is the Moment," and was playing it the night that Miles Davis first hired him.) "It is a big thing for me to represent German culture in America," says Fultz, the daughter of a German mother and American father. "I really think this music is brilliant. Brecht and Weill and Hollaender are so timeless."
In addition to "Alabama Song," the CD contains six other Brecht-Weill compositions: "Bilbao Song," "Denn wie man sich bettet so liegt man," "Barbara Song," "Seeräuber Jenny," "Surubaya Johnny," and "Mäckie Messer" ("Mack the Knife"). Hollaender is represented by two songs from The Blue Angel ("Ich bin von Kopf bis Fuss auf Liebe eingestellt," "Kinder, heut Abend da such ich mir was aus"), "Johnny," and the ballad "Wenn ich mir was wünschen dürfte." Fultz sings Hanns Eisler and Bertolt Brecht's "Song of a German Mother" with Eric Bentley's English lyrics.
Andrea Fultz is looking to take the German Projekt music to clubs and festivals in the U.S. and abroad. "This music is about the context, it's not about singing flawlessly or bebopping," she says. "It's so different for me to sing in German. It's given me more freedom than any other music before."
Andrea Fultz: The German Projekt--German Songs from the Twenties & Thirties
Available at http://rs6.net/tn.jsp?et=1102571914727&s=892&e=001MivyFfV5yTyvpO9_jAvsRuS57D2NbQ2AhOMuVUVZ0q9gw2QLjaugbgSQcYEg4ERwEF74b-Kk5gCw3IMFXd1H8jHFMcFmJWW0CtCg8c-j6-uogj0NM5K_FnHpIHZ6lP-so2qFD8JEwVM= (with sound samples)