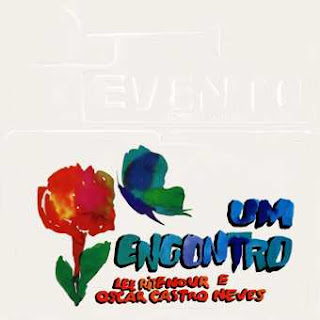 One of the rarest albums ever in the EMI catalog, never reissued in any format. Only 500 copies were printed! Produced by Aloysio de Oliveira for his Evento label, which he had founded a year before, as an affiliated label to Brazilian EMI. Both Ritenour and Castro Neves were in Brazil touring with Sergio Mendes (they performed in Rio at the Teatro Bloch, with the Brasil 77 joined by a symphony orchestra conducted by Dave Grusin), and Aloysio had the idea to pair them as co-leaders on "Um Encontro," the first album with Ritenour's name on the front cover.
The program includes nice versions of Gabor Szabo's "Mizrab" (which Lee would revisit 30 years later on "Overtime" - see below) and "Quem Diz Que Sabe," a song co-written by João Donato, Paulo Sergio Valle & Dora Beatriz which became among the 12 finalists of the "II Festival Internacional da Canção" in 1966. Two years later, Wes Montgomery recorded that song, retitled "Know It All," on his "Down Here On The Ground" album for A&M/CTI - by coincidence, that LP is being reissued this month here in the USA on the "Verve Originals" series.
Backed by an unobtrusive rhythm section, Rit & OCN also recorded a couple of Jobim songs ("Corcovado," "Wave"), two others by Michel Legrand ("Watch What Happens," "The Summer of '42"), pop hits of that time by Stevie Wonder ("You Are The Sunshine of My Life") and Gilbert O'Sullivan (a medley of "Alone Again" and "Clair"), an adaptation of the famous Adagio from Joaquin Rodrigo's "Concierto de Aranjuez", and Castro-Neves' own haunting ballad "Companheira da Manhã," a song he had recorded one year earlier on the sublime "Alayde Costa & Oscar Castro-Neves" LP for EMI.
Posted by Arnaldo DeSouteiro at 12:48 PM