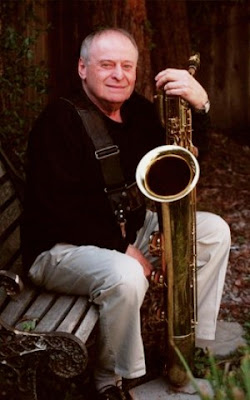 The obituary published on The Los Angeles Times follows:

Jack Nimitz, a jazz baritone saxophonist who played in the Woody Herman and Stan Kenton big bands and in the group "Supersax," died Wednesday of complications from emphysema at his home in Studio City. He was 79.

He soon fell in love with the baritone saxophone. "It sounded so warm and nice and dark and rich," he told The Times some years ago. "The bottom notes are the best notes in the whole orchestra, because if you don't have a good bottom, nothing really works."

He bought his first baritone saxophone at the age of 20 and three years later was playing baritone in Herman's band. Through the 1950s, he played with Herman, Kenton and, later, Herbie Mann.

On the advice of colleagues in Kenton's band, he came to Los Angeles in the early 1960s and established himself as a first-rank studio musician for scores of film soundtracks and recording sessions. He worked frequently for songwriter Johnny Mandel. He also played with such jazz luminaries as Benny Carter, Gerald Wilson and the Lighthouse All-Stars.

In the early 1970s, he added his baritone to the Charlie Parker tribute band "Supersax."

His first album as a leader was the 1995 session on Fresh Sound records called "Confirmation," which focused heavily on bebop tunes.

"Bebop is the most sophisticated form of jazz," he told The Times. "It's very challenging but also rewarding because it feels so good when it happens."

A memorial service will be held Saturday at 3 p.m. at Chapel of the Hills, Forest Lawn Hollywood Hills.
*************
We also recommend this article on the All About Jazz:
http://www.allaboutjazz.com/php/news.php?id=37645
Posted by Arnaldo DeSouteiro at 11:24 AM