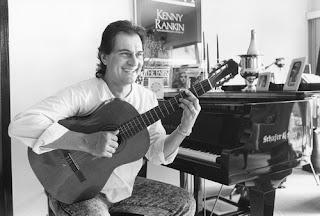 Kenny Rankin, a singer-songwriter and musician whose song "Peaceful" was a hit for Helen Reddy and who had popular covers himself of a pair of Beatles hits, has died. He was 69.

Rankin died Sunday at Cedars-Sinai Medical Center in Los Angeles. The cause of death, according to his management company, was lung cancer, which was diagnosed three weeks ago.

His career, which spanned more than five decades, almost defied categorization. A well-regarded guitarist, he played in Bob Dylan's backup band on the influential 1965 album "Bringing It All Back Home." He also spent several years on the road opening for comedian George Carlin.

Rankin appeared on "The Tonight Show" with Johnny Carson more than 25 times. Carson was such a fan that he wrote the liner notes for Rankin's 1967 debut LP, "Mind Dusters."

As a singer with a velveteen tenor voice, he had highly successful covers of the Beatles' "Blackbird" and "Penny Lane" in the mid-1970s and in 1976 recorded an LP of standards, "The Kenny Rankin Album," with a large orchestra conducted by Don Costa.

In a review of a 2000 Rankin performance at a San Fernando Valley jazz club, critic Don Heckman wrote in The Times: "Rankin has been -- for a decade or more -- a singer whose unusual improvisational skills and innate capacity to deliver a melody with a strong sense of swing stamp him as a consistently appealing jazz artist."

Rankin was born Feb. 10, 1940, and grew up in the Washington Heights section of New York City. He was signed to Decca Records as a teenager and released a few singles. He later signed with Columbia Records.

One of his major influences was Laura Nyro, the late songwriter who wrote "Wedding Bell Blues" and "Stoned Soul Picnic," whom he met in Greenwich Village in 1960.

"She profoundly changed my musical life and affected it to this day, more than anyone or anything else," Rankin told the Globe and Mail newspaper in Toronto in 2007. "She was deep, dark and light, the spectrum of passion."

His peak recording years were in the 1970s, when he released the LPs "Silver Morning," "Inside" and "The Kenny Rankin Album."

Paul McCartney was so pleased with Rankin's covers of the Beatles hits, he asked him to sing a medley of them when McCartney was inducted into the Songwriters Hall of Fame in 1987.

Rankin is survived by his son, Chris; daughters Gena and Chanda; and a granddaughter.
A memorial service is being planned in Los Angeles.
**************
From The New York Times:

Kenny Rankin, a singer, songwriter and guitarist whose easygoing style straddled the worlds of pop, jazz and folk, died on Sunday in Los Angeles. He was 69 and lived in Los Angeles.

The cause was complications of lung cancer, his family said.

Singing in a soft, lilting voice and accompanying himself on acoustic guitar, Mr. Rankin was often categorized as an introspective singer-songwriter in the James Taylor mold. But he drew inspiration from a wide range of sources: the Brazilian singer Joao Gilberto was an acknowledged influence, as were Frank Sinatra and Johnny Mathis. And though he wrote a number of memorable songs -- his "Peaceful" was a Top 20 hit for Helen Reddy in 1973, and other songs of his were recorded by the likes of Peggy Lee and Mel Torme -- he was best known as an interpreter of other people's.

Mr. Rankin's albums tended to include a handful of original compositions but consisted mostly of his own distinctly laid-back, gently swinging spin on the Beatles, Bob Dylan and others. In recent years he devoted increasing attention to Cole Porter, Rodgers and Hart and other songwriters of an earlier era.

Mr. Rankin was particularly partial to the Beatles. He recorded a number of their songs, including "Blackbird," "With a Little Help from My Friends" and "While My Guitar Gently Weeps." When John Lennon and Paul McCartney were inducted into the Songwriters Hall of Fame in 1987, Mr. McCartney asked Mr. Rankin to represent them at the induction ceremony.

Mr. Rankin's association with Mr. Dylan was more personal. He was one of the guitarists on "Bringing It All Back Home," the 1965 album that signaled Mr. Dylan's transition from acoustic to electric music. One highlight of Mr. Rankin's first album, "Mind-Dusters," released in 1967, was his impressionistic version of Mr. Dylan's "Mr. Tambourine Man."

By the time Mr. Rankin recorded that album, he had acquired a high-profile fan in Johnny Carson, who would go on to present him on "The Tonight Show" more than 20 times. Carson also contributed liner notes to "Mind-Dusters."

Born in Manhattan on Feb. 10, 1940, Mr. Rankin never formally studied music but began his recording career as a teenager with some singles for Decca. Over the years he recorded for Mercury, Atlantic and several other labels. He had recently signed with Sly Dog Records and was preparing to record a new album when he became ill a few weeks ago.

Mr. Rankin was divorced from Yvonne Rodriguez-Calderone. He is survived by a son, Chris; two daughters, Gena Rankin-Ray and Chandra Rankin; and a granddaughter.

If the music industry and music critics often had trouble characterizing Mr. Rankin's music, he himself did not.

"Above all, I'm a jazz singer who likes to mess with the melody," he told The Pittsburgh Post-Gazette in 1997. "I sing the songs that touch me in the heart, the songs I would like to sing to someone in front of a roaring fire on a feather couch draped in flowers."

"But don't get me wrong," he added. "We don't live in a fantasy world, though we all have one."
Posted by Arnaldo DeSouteiro at 3:21 PM