Get tix while they last:
http://www.livenation.com/edp/eventId/405503/
(...and taking pictures of people in the audience in a previous night)
Borgata has The Event Center and The Music Box, which feature world-class entertainers.
The Borgata Events Center has 3700 seats and 30,000 sq. ft. of space. More intimate entertainment events are held in the smaller, 1000 seat Music Box.
In 2003, the 43 story Borgata opened as Atlantic City's newest upscale Casino Resort. It features a Tuscany theme, and is one of the stops on the World Poker Tour.
Located at One Borgata Way in the Marina District, it's a joint venture between Boyd Gaming and MGM Mirage.
The Borgata features one of the most active and largest casinos in town, big time entertainment and numerous fine dining choices.
The hotel has 2002 rooms, all with outstanding views. All rooms have floor-to-ceiling windows many of which which provide spectacular views of the bay and ocean; in-room amenities include a Sony 40" LCD Flat Panel HD TV, 400-thread-count Egyptian cotton sheets, bathrobes and slippers and large bathrooms with granite countertops and glass-enclosed showers with Rain Dome showerheads.
"Water Club", a new 800-room tower opened in June of 2008, with five pools and a "Spa in the Sky," featuring signature in-room dining by Manhattan Chef, Geoffrey Zakarian, and shopping at six exclusive boutiques.
The Borgata now has "Izakaya", a new Japanese tapas restaurant and nightclub run by celebrity chef, Michael Schulson. The 5th season of the Fox Networks TV show, "Hell's Kitchen," was filmed at the Borgata.
The Borgata has 160,000 sq. ft. of gaming space that inculdes an 18 table Asiangaming pit. They have a total of 285 gaming tables that include 85 poker tables. The Borgata hosts daily and late night poker tournaments, offering 4000 slot machines.
Casino games include: Slots, Blackjack, Roulette, Craps, Poker and other novelty games. They also have Baccarat, Mini-Baccarat, Pai Gow, Pai Gow Poker and Spanish 21. The Water Club has six exclusive boutiques: La Perla, Just Cavalli, Hugo Boss, Hearts on Fire, Fixation and Cameo.
'Nuff said. 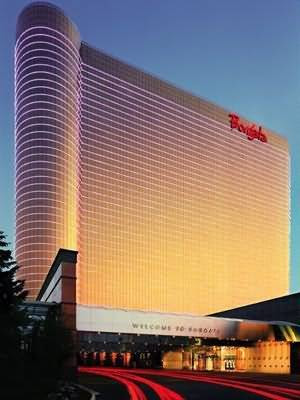 Posted by Arnaldo DeSouteiro at 10:20 AM