Krall & Streisand: "Love Is the Answer" 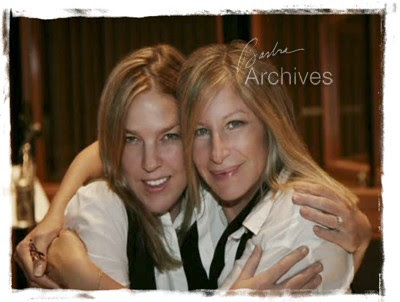 Just got this press-released from Sony Music USA, regarding the Barbara Streisand collaboration with Diana Krall on the "Love Is The Answer" project, orchestrated by one of my all-time favorite arrangers, Johnny Mandel.
**********
Columbia Records Announces the Release of 'Love Is the Answer,' the New Studio Album of Jazz-Flavored Classics and Standards by Barbra Streisand

The first full-length collection of new studio recordings from eight-time Grammy award winner Barbra Streisand since 2005's "Guilty Pleasures," and first new Barbra Streisand album since "Live in Concert 2006," "Love Is the Answer" presents the artist as a cabaret and jazz singer of emotional clarity, depth and maturity, offering the listener a warm and intimate selection of late night meditations on love's powers, heartbreaks and solaces.

"Love Is the Answer" provided an opportunity for Streisand to work for the first time with the Grammy-winning Canadian jazz artist Diana Krall (piano) and her quartet (guitar, bass, drums) who brought a refined and sensual poignancy to the album's spare and subtle accompaniments.

Rounding out the album's smoky after-hours ambience with his sublime orchestrations is the legendary songwriter ("The Shadow of Your Smile") and Grammy-winning arranger Johnny Mandel, who worked with Streisand on her 1993 "Back to Broadway" album and arranged/co-produced Krall's 1998 Grammy-winning "When I Look in Your Eyes."

According to the RIAA, Barbra Streisand is the #1 best selling female recording artist in history and the only woman to make the Top 10 all time best selling artists list, which includes Elvis Presley and The Beatles. Over the course of her career, Streisand has recorded 50 gold, 30 platinum and 13 multi-platinum albums. An artist of unparalleled accomplishments in multiple entertainment fields, Streisand has made her mark as an award winning actress of stage and screen, recording artist, concert performer, movie producer, film director, screenwriter and songwriter.

Having earned two Oscars (Best Actress and Best Song), five Emmys, 11 Golden Globes, 10 Grammys including the Grammy Lifetime Achievement and Grammy Legend Awards, a special Tony Award (in 1970 as "Star of the Decade"), two Cable Ace and three Peabody awards, she is the only performer to hold honors from all of those institutions. In addition, Streisand is a recipient of the American Film Institute's Lif e Achievement Award, America's National Medal of Arts and France's Legion of Honor. In December 2008 she became the first female director to receive the prestigious Kennedy Center Honor.
Posted by Arnaldo DeSouteiro at 10:41 AM