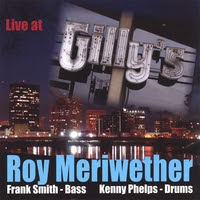 Roy Meriwether, as saxophonist Ritchie Cole astutely observed, is one of the most underrated pianists on the scene today. Meriwether has attracted a cult following through the years, and wherever and whenever he appears, more are added to the fold.

Born in Dayton, Ohio, Roy Meriwether started playing piano at age three and had composed two pieces before he was four. Shortly thereafter, he began playing in his father's church, accompanying the family choir, and performing with gospel singers throughout the Midwest.

Roy turned professional with his own group at age 18 and has devoted himself to both composing and performing ever since. Reviewers are frequently impressed by his power. Critic Arnold Shaw once described him as a 'two-fisted pianist who in this day of right handed wizards has the sound of a champion, with thunder in his left hand and lightning in his right."

"What sets Roy Meriwether apart from most other jazz pianists is his gospel background. The strong, syncopated rhythm patterns of gospel are apt to surface in his works, whether he's playing an early Miles Davis jazz standard or one of his own originals..."
- New York Post Weekend

"One of Meriwether's outstanding musical traits is his ability to capture the listener with his subtle device of tension building in his solos and emotionally wringing you out before freeing you."
- Chuck Workman, The Indianapolis Star

1 I'm Confessin' That I Love You
2 Four
3 Ah George We Hardly Knew Ya
4 Gee Baby Ain't I Good To You
5 The Sidewalks Of New York
6 After Hours
7 Soup n Onions
8 He Knows How Much We Can Bear
9 St. James Infirmary Blues
10 Jesus Christ Superstar
2006年作品