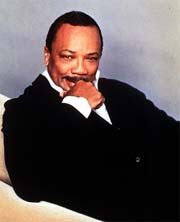 On the eve of the second anniversary of Hurricane Katrina’s landfall along the Mississippi and Louisiana gulf coasts, entertainment icon, mentor and humanitarian Quincy Jones and international pop sensation and humanitarian Usher have joined forces with Habitat for Humanity to call attention to the ongoing hurricane recovery efforts and are imploring Americans not to forget the victims of the storm.

In the coming weeks the pair will announce specific plans to promote continued relief efforts. They are sending out an initial call to action in Episodes Three and Four of the recently launched video podcast series The Quincy Jones Show (available for viewing at QuincyJones.com and iTunes). Quincy makes his plea in Episode Three, which debuts at 12:01 a.m. ET on Aug. 29. Usher’s appeal will be featured a week later in Episode Four at 12:01 a.m. ET on Sept. 5.

“I’ve known Usher since he was 16 years old,” said Quincy. “He’s an extremely talented and remarkably respectful young man. I can’t explain how much he means to me; he’s almost like a son. He will forever have an apartment in my heart.

“Our hope is together our voices will be heard by more people,” Quincy added. “There will be more progress made to aid the victims of Hurricane Katrina and to revitalize the Gulf Coast. Passion and money aren’t enough. We have to be strategic and do our homework and learn more about what it takes to get the people in the worst shape back on their feet. It’s about more than money. It’s about the application of the money and the state of mind of a lot of spirits who have been broken. We have to figure it out step by step, more quickly to make more of a difference.”

Added Usher, “As Americans impacted by Hurricane Katrina still suffer from lack of housing and business revitalization, poor health and poor education, I’m proud to be partnering with an icon who helped set the standard for artists to give back, my mentor and friend Quincy Jones. Together we will continue to serve and work for the youth and families impacted by Hurricane Katrina through select initiatives. Shortly there will be an announcement of our joint effort with more details and new initiatives with local partnerships.”

Quincy notes Habitat for Humanity has more than 1,100 homes built or under construction on the Gulf Coast, but that more volunteer help is needed. “Habitat for Humanity has a need for more than 1,000 volunteers per week,” Quincy said. “It’s something we can all do to help our fellow Americans get back on their feet and into homes they can afford, and so many other initiatives are needed, too.”

Supporting the hurricane recovery effort is only the latest in Quincy’s long legacy of social activism efforts. Most well-known is USA for Africa’s A-list star-studded “We Are the World” charity single, the best-selling single of all time, which Jones produced and conducted to raise funds to help famine-relief efforts in Ethiopia. “Americans are the most generous people of the world when there is a need,” said Quincy. “The need in our own country continues and it’s happening right now in our own backyard which we can not overlook. The people along the Gulf Coast are still suffering and still need our help. We need to let them know they are in our hearts and not forgotten.”

In response to Hurricane Katrina, Usher’s charity New Look launched Project Restart and to date has helped over 700 families resettle into housing through rental and utility assistance. Usher is committed to investing long-term in the rebuilding efforts of the Gulf Coast through continued housing and community support and the mobilization of volunteers, and through the soon-to-be-announced collaboration between Usher and Quincy. “I am greatly blessed, and I believe as many of you do, that to whom much is given, much is expected. This is one of the main reasons I started New Look. I wanted to know that I’ve made a difference in a child’s life; that I have significantly used my own talents, my passion and resources to impact the lives of young people ¬and ultimately their families and communities ¬in positive and sustainable ways. For me, the best way to do that was to sit in the driver’s seat of a nonprofit organization, to build a team that could help formulate a strategic plan with measurable outcomes, and to implement it in a responsible manner.”

Quincy’s partner in the digital initiatives among other areas, Robert Thorne of The Robert Thorne Company, said “Quincy insisted his video podcast series The Quincy Jones Show dedicate many episodes to his humanitarian views and efforts, and urged a rush to production with Episodes Three and Four to remind viewers on Katrina’s second anniversary that the rebuilding and relief efforts must continue in the Gulf Coast and improve.”

Quincy has a history of working with Habitat for Humanity. In August 2000, after promising Nelson Mandela that he would build dozens of homes in South Africa, Quincy led a contingent of at-risk youth from Los Angeles to Johannesburg. The project, dubbed “From South Central to South Africa,” provided volunteer power to build the houses in poor areas of the region.
PS:
The Quincy-produced Carnaval: The Magic and the Music, to be directed by Brett Ratner, is set to begin production in February 2008. Part of the film’s proceeds will be dedicated to improving conditions in Brazilian favelas and the Gulf Coast.
Btw, Quincy's new CD compilation project with a handsome Brazilian producer is scheduled for release in late September.

Also, Quincy founded Project Q to help improve the health and well-being of millions of children in developing countries. It is a joint initiative of Quincy and the Harvard School of Public Health and aims to raise $5 Million in the next few years.
Posted by Arnaldo DeSouteiro at 10:01 AM