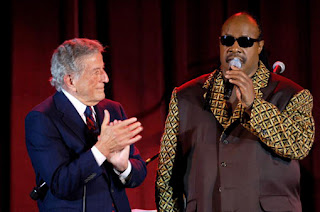 Tony Bennett plans to record a whole album together with Stevie Wonder, as Gary Graff reports ( Billboard ). Wonder was planning to do a jazz album anyhow, Bennett says, and as he is interested in the same they talked about getting together for it. The recording of "For Once in My Life" from Bennett's CD "Duets. An American Classic" just earned both a Grammy. In September PBS will broadcast a documentary about Bennett, produced by Clint Eastwood. Also in September his new CD will be released; and in October a book with 200 of his paintings will be published. One should never stop learning and studying, says the 81 year old singer. Work keeps him young.
Posted by Arnaldo DeSouteiro at 9:32 PM