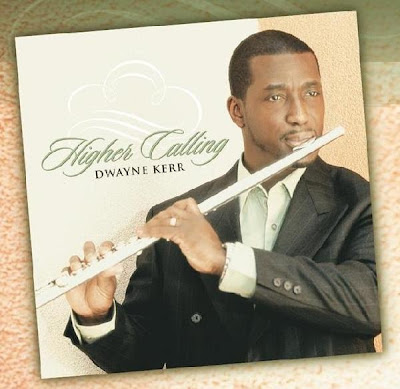 His masterful mix of sounds and grooves is the memorable variable that makes flutist Dwayne Kerr, of the Erykah Badu Band (Neda Stela), a rising figure in contemporary music today. Playing an instrument that traditionally has been heard more often than seen, Kerr has put the flute up front on display with his unique playing style in his debut CD, Flutation, which was released on DManns Records in January 2003. His new CD, Higher Calling, is a maturation of an artist that has evolved over several years in both the live setting and in the studio.
Kerr was hired to play as a band member for Grammy award-winning Erykah Badu in 1998. While touring with Erykah, Dwayne has played in Africa, Italy, Japan, throughout Europe and Scandinavia, on the all-female artists Lilith Fair Tour and television appearances on The Tonight Show with Jay Leno, MTV's Real World, The Oprah Show, Live! With Regis and BET Live.

While touring and recording with Erykah Badu for the past several years, Dwayne added his sound to recordings including Ms. Badu's version of the Chaka Khan hit, "Hollywood," which is on the soundtrack/CD to the Spike Lee movie, Bamboozled, on Motown Records and Erykah's song, "Today," which is on the Red Star Sounds compilation CD on Epic Records. Kerr played on Erykah's latest CD, Worldwide Underground, and her previous CD, Mama's Gun, on Motown Records.

"The combination of determination and artistry in Dwayne Kerr is something I would very frankly (and selfishly) like to clone for young aspiring musicians!" - Kirk Whalum
Posted by Arnaldo DeSouteiro at 9:57 PM