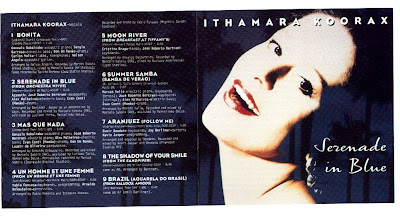 ”One has to do so many kinds of things in show business,” observes singer JIMMY SCOTT, “that quite a few times you get stuck doing something that isn't your idea at all. It makes for a really enjoyable session when you've got a producer you feel compatible with and the musicians are picked well. That's why I love this album--it's like a gift to me.” http://www.fantasyjazz.com/html/scott9305.html

JIMMY SCOTT is the subject this week of National Public Radio's “Jazz Profiles” (check with your local station for exact date and time of broadcast). Produced by Njemile Carol Jones, the program is hosted by NANCY WILSON, an unabashed fan who has this to say about Scott:

”There would be no Nancy Wilson were it not for Little Jimmy Scott. I owe all that I am and all that I have to this man's singing style.”

The veteran singer, who turns 75 in July, is not only “at the peak of his interpretive powers,” in producer Todd Barkan's words, but is enjoying the top bookings and sustained recognition he has so long deserved. Scott toured Japan last month and plans to return in November; he'll be in the Bay Area next month for appearances at San Francisco's Great American Music Hall (6/22) and Sweetwater's in Mill Valley (6/23), and is set to sing three nights at Birdland, NYC, in August (8/10-12).

The 35-year-old Rio native has recorded five previous discs under her own name in Brazil and Japan, where she regularly tours, and has collaborated with the likes of Hermeto Pascoal, Luiz Bonfa, and Dom Um Romao. Her 1995 CD “Rio Vermelho” included the final recorded performance of Antonio Carlos Jobim, who described Ithamara as “simply one of the best singers on the scene.”

Ithamara's Milestone album, produced by ARNALDO DeSOUTEIRO, is “a very personal collection of songs I like. They are classic and timeless favorites” --ranging from Brazilian standards like Jobim's “Bonita” and Ary Barroso's “Aquarela do Brasil” to “Moon River,” “Un Homme et Une Femme,” and the title track, on which Koorax is backed by former Milestone recording artists AZYMUTH. http://www.fantasyjazz.com/catalog/azymuth_cat.html

Other featured sidemen on “Serenade in Blue” include GONZALO RUBALCABA, DOM UM ROMAO, EUMIR DEODATO (who co-produced two selections), and pianist/composer MARCOS VALLE.
Posted by Arnaldo DeSouteiro at 10:38 AM