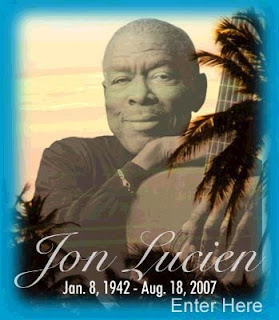 Songwriter, musician and singer Jon Lucien, truly a unique artist, passed away on August 18, 2007, of respiratory failure and other complications. Lucien had just performed at the Berkeley Jazz Festival a few weeks ago. He died in Florida, where he had been living for the last few years. By his side were his wife Delesa and his daughter Celesa.

Adored by the LA jazz community, he was a close friend of people like Herbie Hancock and Wayne Shorter, and developed a cult-following after the "Rashida" album (produced by Larry Rosen and featuring Dave Grusin)and the "Lady Love" hit. In the '70s, he was married to Maria Booker, ex-wife of bassist Walter Booker, and sister of Ana Maria Shorter, married to Wayne. His daugher with Maria died in the TWA 800 crash, together with Ana Shorter.

"More than any other singer, Jon Lucien captured the essence of romance. His voice was rich and expressive, his best songs were perceptive poetic tales of devotion, trust, hope, harmony and spirituality. Three dimensional parables of love lost and love found and relationships filled with the promise of a new day. He seemed to possess an innate ability to evoke an atmosphere and create images not only through his lyrics but the colors of his music," said Lois Gilbert, director of Jazz Corner.

Born in Tortola, Jon began performing professionally at 17 in the Virgin Islands. In 1970 he released his first recording in the United States, "I Am Now" on RCA. In the 37 years since the release of his debut album, connoisseurs and assorted in-the-know types have spoken his name with the utmost hushed reverence. His seamless melding of jazz, R&B, Caribbean rhythms and Brazilian music proved to be a decisive early influence on what would be simplified and marketed as the twin formats of "quiet storm" and "smooth jazz," although very few artists working in either format approach Lucien's level of artistry or innovation, not to mention originality. Jon lucien is survived by his wife Delesa, daughter Celesa, son Hanis Lucien, step son Mark and grandchildren.

Memorial plans will be announced soon. A book of Jon's lyrics will be published in the near future.

For detailed bio and discography, or to listen to his music, please visit http://www.jonlucien.com/
His CDs are available through http://www.jazzcares.com/

"I would say my sound is a romantic sound...it's water...it's ocean...it's tranquility."
Jon Lucien
Posted by Arnaldo DeSouteiro at 1:04 PM