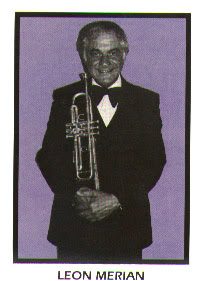 The trumpeter Leon Merian died August 15th in Bradenton, Florida, at the age of 83 of complications from diabetes. The son of Armenian immigrants was the first white musician to be a regular member of a black big band, when he was hired by Lucky Millinder in 1942. He worked with Frank Sinatra, Ella Fitzgerald, but also with Elvis Presley and other popular singers and can be heard on many film soundtracks. After he moved to southwest Florida 20 years ago, he became active in the local jazz scene, and in 2000 published his autobiography "The Man Behind the Horn". Obituary: Southwest Florida Herald Tribune .
Posted by Arnaldo DeSouteiro at 9:25 PM