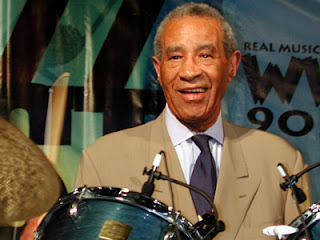 More than 2,000 people attended a funeral service at New York's Riverside Church on Friday dedicated to Max Roach who passed away on August 16th ( New York Times , Bloomberg.com ). Among the speakers were Bill Cosby, as well as a federal and a state politician. Music came from Dr. Billy Taylor and Randy Weston, from Cassandra Wilson, Gary Bartz and Jimmy Heath. Amiri Baraka read a poem dedicated to Roach. Sonny Rollins, Ron Carter and Ornette Coleman were among those standing in line to pay their last farewell to Roach whose body lay in an open casket.
With respect to Max Roach, DownBeat will be dedicating the cover story of its November issue to the legendary drummer.
Posted by Arnaldo DeSouteiro at 9:54 AM