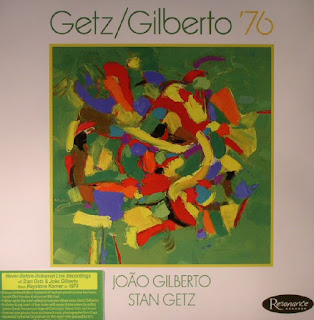 After the 10" LP issue "Selections From Getz/Gilberto '76," with only 4 tracks, released on April 18, 2015, to celebrate the Record Store Day, now comes the complete package of a musical miracle. This is not a reissue nor a "new recording", of course, but it's a fantastic new release!

The LP has been eagerly awaited by Getz's and Gilberto's fans since we first posted about it last year, and the stores expect even better sales than another impressive Gilberto album, "Um Encontro No Au Bon Gourmet," released by the Italian label Doxy (specialized in Public Domain recordings) as announced here in February 2015.

Stan Getz and João Gilberto reunite in 1976 with these previously unreleased recordings from a four-night engagement at San Francisco's Keystone Korner. This album commemorates performances that are one of the few times this duo collaborated in the 1970's, after their multiple Grammy award-winning 'Getz/Gilberto" released by Verve in 1964, and soon after their second studio reunion on "The Best Of Two Worlds" in 1976.
​
Resonance acquired the tapes from jazz impresario Todd Barkan, owner of the now-defunct (but very famous in the 70s) Keystone Korner jazz club in SF. They cleared rights with the Stan Getz Estate and the other musicians, including Joao Gilberto.

One of the most important releases of the year. 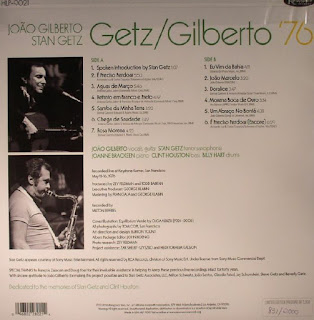 Posted by Arnaldo DeSouteiro at 9:25 PM