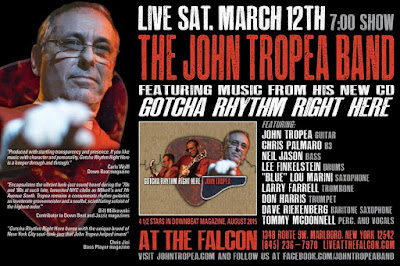 Get ready for a jazz-funk-fusion night with no musical prejudice!

Ace guitarist John Tropea (one of my favorite artists since I heard his solos on Deodato's albums like "Prelude," "Deodato 2" and "Whirlwinds" as well as his own projects for TK Marlin) leads his all-star band tonight, March 12 @ The Falcon (1348 Route SW, Marlboro, NY). 7pm!

John Tropea is one of the most admired and highly regarded guitar players of his generation. His playing shows a vast knowledge and respect for the tradition of the instrument as well as an original style that continues to define how the guitar best serves a wide variety of musical styles. He is a musician’s musician who attracts the finest players for his own projects.

Tropea has written for and played with major recording artists worldwide. In his long career, his contributions to other artist’s successes, include his solo work with Deodato, (2001 theme), projects with Laura Nyro, Harry Chapin (Cat’s in the Cradle), Paul Simon (Fifty Ways), Alice Cooper (Goes to Hell), Eric Clapton (Journey Man), Dr. John, among others.

He is also a composer, arranger, and producer whose vital work is demonstrated by his personal projects. Tropea has a deserved worldwide reputation (specially in Japan, where he recently toured with Steve Gadd as special guest) as an artist of quality among both audiences and other musicians.
Posted by Arnaldo DeSouteiro at 10:41 AM