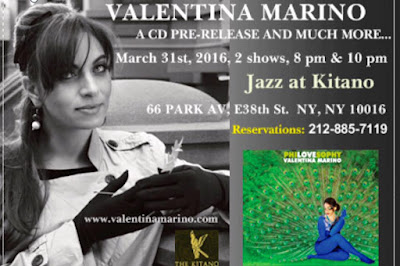 After her successful appearance @ Zinc Bar last month, the multi-talented Valentina Marino now brings the pre-release celebration of her debut album to Jazz at Kitano (66 Park Ave.) on March 31st. 2 sets at 8pm and 10pm. Reservations are recommended: (212) 885-7119. 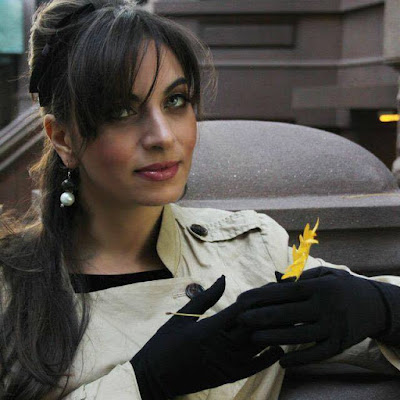 Vocalist, songwriter, arranger and lyricist Valentina Marino brings the sensitivity, sophistication and earthiness of her Mediterranean roots to cutting edge jazz. Marino began her musical studies at the University of Music in Rome, continued taking piano and voice lessons in Vienna and later attended the New School for Jazz and Contemporary Music in New York City, where she received a BFA in Vocal Jazz Performance under the mentor ship of, among others, legendary bass player Reggie Workman, saxophonist David Glasser and vocalists Amy London, La Tania Hall, Julie Hardy and Janet Lawson.

While deeply rooted in Jazz, Marino is a musical gypsy, in constant search for unexplored paths where jazz can meet the energetic vibes and rhythms of Tango and Brazilian music and where pop songs can explore the language of improvisation or land into adventurous arrangements. What would remain of a human being without feelings and sensitivity? What would life be without the truth of human stories, the magic of improvisation, the pulsing rhythms of emotions, the passionate dances of the heart? On her music journey Marino sings these questions and searches in the moment for any possible answer.

Living in New York City, the epicenter of Jazz and world music, she has found the perfect environment to keep nurturing and developing this musical inter fusions through collaborations with artists coming from many different backgrounds. "Jazz is my magnet" – says Marino – "I love to see what happens when I temporarily separate from it and then find myself strongly pulled towards it". The blend of different music possibilities gravitating around jazz is what inspired her debut album, "PhiLOVEsophy" which will be released this Fall in New York City. The album is a selection of her originals, contemporary jazz songs and standards, bossa nova and pop tunes that have been arranged within a jazz realm.

Ms. Marino has performed, recorded and collaborated with various musicians of the European and American Jazz scene, including Cameron Brown, Jay Azzolina, Saul Rubin, Ray Gallon, Hans Salomon. In Vienna she sang at Zwe, Unplugged, Papas in Naschmarkt, Tunnel, Birdcage, Fischer Bräu, to name a few and performed with the Pandora's Box Tango Argentino Ensemble at The Rote Bar in Volkstheater. In Rome she performed at Charity, Flamingo and Bebo do Samba. In New York she sang and appeared among the others, at Somethin' Jazz Club, The Garage, Bar Next Door, The Flatiron Room, Cleopatra's Needle, Kitano, The Cotton Club.
Posted by Arnaldo DeSouteiro at 7:44 PM