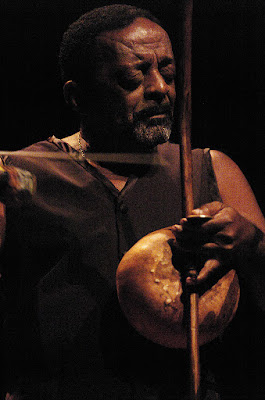 One of the world's greatest percussionists, winner of the DownBeat Polls several times, Naná Vasconcelos just passed away in his hometown, after a battle against lung cancer. His last concert was in Salvador, Bahia, on February 28.

But his "home" was the world. The first time I heard him, in the early 70s, was on Gato Barbieri's "Fenix" LP. He remained on Gato's group for some years, and recorded other great albums with him, touring all over Europe, where he also recorded with Agustin Pereyra Lucena, Jean-Luc Ponty, Phil Woods, Rolf Kühn, Joachim Kühn, Oliver Nelson and countless others.

Returning briefly to Brazil, he did his debut album as a leader, "Amazonas," for the Philips label in 1973, and it criminally never appeared on CD. I've tried to reissue it many times, as well as tried at least to include some tracks in some compilations I produced for Universal, but all requests were denied... A typical proceeding in Brazil, something very usual there, a country that hates and envies the Brazilian artists that achieve international fame.

That same year, he also recorded a solo album in France, "Africadeus," for the Saravah label.

After some recordings with Milton Nascimento ("Milagre dos Peixes"), Luiz Bonfa (I had the honor to produce the CD reissue of "The New Face of Bonfá" for BMG), and Joao Donato (the famous track "Cala Boca Menino," later an acid jazz anthem) in Brazil, Nana returned to Europe and did, in 1975, a wonderful album with Novelli and Nelson Angelo, followed by sessions with fellow Brazilian expatriates Manduka and Teca & Ricardo.

A turning point came with the 1977 release of a superb duo album with Egberto Gismonti, "Dança das Cabeças," on the ECM label. Many sessions for ECM followed during the 70s and 80s, not only with Gismonti but also as a member of the Codona trio (that he co-founded with Don Cherry and Collin Walcott) and, many years later, of the Pat Metheny Group (the double-album "Travels" is awesome!)

Back in 1977, he had decided to move to the USA, where he initially became a member of Gaudencio Thiago de Mello's Amazon big band in NY, and later recorded with Lloyd McNeil, Jon Hassell, Terumasa Hino, Brian Eno, Woody Shaw, Jon Lucien, Sergio Mendes & Brasil 88, and even Chaka Khan and B.B. King (some amazing overdubs on "Now Appearing At Ole Miss".)

Another groundbreaking solo album came in 1979, "Saudades" (ECM), which includes the suite "O Berimbau," a masterpiece recorded with the Radio Symphony Orchestra Stuttgart.

During the 80s, there were albums with Ron Carter, Jeremy Steig, Eddie Gomez, Jan Garbarek, Bob Moses, Michael Franks, Chico Freeman, Jim Pepper, Claudio Roditi (his debut album for CTI, "Red on Red") and the Talking Heads, besides the tours and recordings with Metheny.

In the late 80s, Nana signed with Island Records' subsidiary Antilles and released "Bush Dance," which includes collaborations with Mario Toledo, Clive Stevens, Arto Lindsay and with his lesser known brother Erasto Vasconcelos, also a great percussionist. I have included one of its tracks, "Futebol," in the compilation "A Trip To Brazil Vol. 5: Copa do Mundo 2006" that I produced for Verve.

Carly Simon, Caetano Veloso, Eliane Elias, Paul Simon, Badi Assad and Trilok Gurtu were partners in sessions during the 90s. Then, Naná returned to Brazil in the early 2000s, and started to tour extensively thrughout the country with local artists. Rest in Peace. 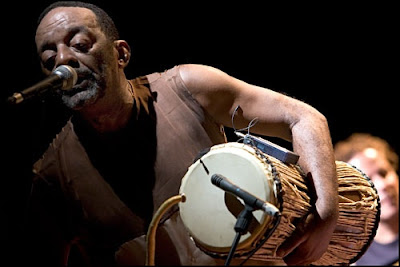 Posted by Arnaldo DeSouteiro at 7:37 AM