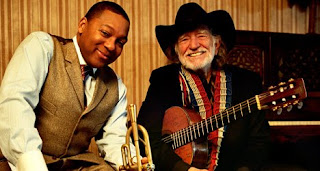 Willie Nelson & Wynton Marsalis’s acclaimed collaboration "Two Men with the Blues" debuted today at #20 on the Billboard Top 200 chart with first week sales of 21,650, marking a career-high for both of these legendary artists. That ranking is Willie’s highest of the Soundscan era, and his highest since 1982 when his album "Always on My Mind" hit #2 on the charts ("Stardust" peaked at #30 in 1978). For Wynton the charting is a career best. Previously, his album "Hot House Flowers" reached #90 on the Top 200 back in 1984.
Released July 8, 2008, by Blue Note Records, "Two Men with the Blues" has also been garnering rave reviews from critics across the musical spectrum. The Boston Globe called it “an unmitigated, ear-tickling success,” while Billboard remarked that the album’s “enviably assured vibe pretty much drips out of the speakers.” The duo gave a stunning performance of “Bright Lights Big City” on NBC’s The Tonight with Jay Leno on July 10 (click HERE to watch) and NPR’s All Things Considered broadcast a fantastic 11-minute interview segment on July 12 (click HERE to listen).

Jazz at Lincoln Center has also just announced a return engagement to the site where the album was recorded live in January 2007. On February 9, 2009, Willie & Wynton will reunite, this time in JALC’s Rose Theater to help celebrate the 70th anniversary of Blue Note Records. Tickets will be available for purchase thru JALC’s box office beginning August 13.
Posted by Arnaldo DeSouteiro at 10:07 AM