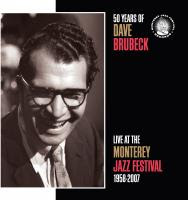 Monterey Jazz Festival Records, in collaboration with the Concord Music Group, will issue the second wave of six never-before-released, archival live recordings taped on the Arena stage of the world-famous Monterey Jazz Festival. The releases are slated for August 5, 2008, seven weeks prior to MJF's celebration of its 51st annual presentation of world-class jazz, September 19-21, 2008.

Four of the historic releases will be year-specific recordings, including Art Blakey and the Giants of Jazz/1972; Shirley Horn/1994; Tito Puente & His Orchestra/1977; and Jimmy Witherspoon featuring Robben Ford/1972. Two “best of” recordings include Dave Brubeck - 50 Years of Dave Brubeck: Live at the Monterey Jazz Festival, 1958-2007 and Cal Tjader: The Best of Cal Tjader, Live at the Monterey Jazz Festival, 1958-1980, and are compilations of the legendary artists’ multiple performances at MJF.

Showcasing legendary artists caught at the peak of their powers, the releases are the second round of recordings to be brought to the public by the MJFR label, which was founded in celebration of the 50th Annual Monterey Jazz Festival in 2007. Initial historic releases included Louis Armstrong and His All-Stars/1958; Miles Davis Quintet/1963, Thelonious Monk Quartet/1964; Dizzy Gillespie/1965; Sarah Vaughan/1971; and a 50th-year compilation disc that included selections from the aforementioned albums as well as live material from Diana Krall, Joe Henderson, Dave Brubeck, and Pat Metheny.

The recordings represent the wide variety of classic performers in the mainstream jazz, Latin and blues genres that are featured at Monterey, ranging from piano trios and small combos to big bands. Adding to the legacy of the featured artists, the recordings also feature a cornucopia of legendary leaders-as-sidemen, including saxophonists Paul Desmond, Gerry Mulligan and Sonny Stitt; trumpeters Roy Eldridge, Dizzy Gillespie and Clark Terry; pianists John Lewis and Thelonious Monk; and percussionists Poncho Sanchez and Mongo Santamaria.

The six Monterey Jazz Festival Records archival releases have a street date of August 5, 2008. The following are thumbnail sketches of each record:

Art Blakey and the Giants of Jazz - Live at the 1972 Monterey Jazz Festival
“The repertoire of the Giants of Jazz in this collection is made up of bop classics and superior standards, an alternation of exciting swing with lovely balladry." Liner notes by Doug Ramsey, author.

Live at the Monterey Jazz Festival, 1958-2007
“…an uncommon overview of artist/venue synchronicity. Unlike other volumes in the series, it is not confined to a single performance, but rather spans the entire Monterey Jazz Festival history and captures much of Brubeck's own history in the process.” Liner notes by Bob Blumenthal, JazzTimes.

Tito Puente & His Orchestra - Live at the 1977 Monterey Jazz Festival
"Tito's performance [in Monterey] was a long-awaited first that showcased a 15-piece orchestra with a humongous sound. It also signaled Tito's entry into the jazz arena…and would find him traveling the world playing Latin jazz throughout the eighties and nineties. It would also raise his profile into the American mainstream." Liner notes by Jesse "Chuy" Varela, KCSM FM, San Mateo, California.

Cal Tjader - The Best of Cal Tjader: Live at the Monterey Jazz Festival, 1958-1980
"…Tjader was equally versed in jazz, Afro-Cuban and other Latin idioms and bridged them in a way that never sounded forced….blues and boleros, mambo, bop and bossa nova - with grace, taste, and feeling." Liner notes by Jesse Hamlin, San Francisco Chronicle.

Jimmy Witherspoon featuring Robben Ford: Live at the 1972 Monterey Jazz Festival
"Spoon always had the audience in the palm of his hand and this show was no exception. Spoon was an entertainer par excellence." Liner notes by Robben Ford.

Personnel: Jimmy Witherspoon, vocals; Robben Ford, guitar, alto saxophone; Paul Nagel, electric piano; Stan Poplin, bass; Jim Baum, drums (on bonus track, "When I Been Drinkin'," recorded in 1959: Coleman Hawkins, Ben Webster, tenor saxophones; Roy Eldridge, trumpet; Woody Herman, clarinet; Earl "Fatha" Hines, piano; Vernon Ashley, bass; Mel Lewis, drums). Set list: "I'm Gonna Move to the Outskirts of Town," "S.K. Blues," "Kansas City," "Goin' Down Slow," "Walkin' by Myself," "Ain't Nobody's Business What I Do," "I Want a Little Girl," "I Don't Know," "Early One Morning," (incomplete) "Reds and Whiskey," (bonus) "When I Been Drinkin'"
**********
About MJF Records
The MJF archives now include more than 1600 tapes with more than 2000 hours of concerts, all recorded from 1958-present on the Arena stage of the Festival. The founding of MJF Records is the first time a festival has launched its own label, and was a natural outgrowth of the digitization of the aging recordings (a process that took several years), saving the historic music from deterioration.

MJF General Manager Tim Jackson started thinking in broader strokes in 2004 when the digitization process started. "I wanted to leverage the festival's assets and use the 50th as a launching pad to make this historical music available to people," he says.

Upon their release in August 2007, the CDs made their way onto many critics’ top-ten lists and garnered strong radio airplay. On the on the Billboard jazz charts, the Miles Davis Quintet/1963 reached #8, the Monterey Jazz Festival 50th Anniversary All-Stars/2007 reached #12, and the Thelonious Monk Quartet/1964 reached #22.

The label MJFR also plans to new Festival recordings, inaugurated with Live at the Monterey Jazz Festival 2007 by the Monterey Jazz Festival 50th Anniversary All-Stars -- led by three generations of masters including James Moody, Terence Blanchard, Benny Green and Nnenna Freelon -- which toured the United States for ten weeks in early 2008, performing to over 43,000 fans. Label General Manager Jason Olaine commented "We're not going to be stuck in a jazz time warp. We're excited to deliver important historical music, as well as assemble special projects and all-star ensembles to debut at the festival each year."

The label can be found on the web at www.montereyjazzfestivalrecords.com
Posted by Arnaldo DeSouteiro at 12:07 PM