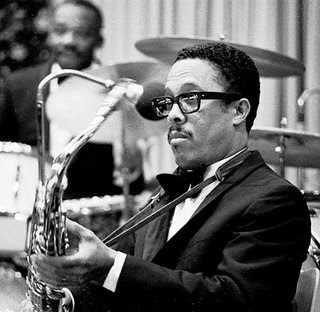 "Johnny Griffin, a tenor saxophonist from Chicago whose speed, control and harmonic acuity made him one of the most talented American jazz musicians of his generation yet who spent most of his career in Europe, died Friday at his home in Availles-Limouzine, a village in France. He was 80 and had lived there for 24 years.

His death was confirmed by his wife, Miriam, who did not give a cause. He played his last concert on Monday in Hyères, France.

Mr. Griffin’s modest height earned him the nickname the Little Giant; his speed in bebop improvising marked him as the Fastest Gun in the West; a group he led with his fellow saxophonist Eddie (Lockjaw) Davis was informally called the Tough Tenor band, a designation that was eventually applied to a whole school of hard-bop tenor players. And in general, Mr. Griffin suffered from categorization.

In the early 1960s, embittered by the critical acceptance of free jazz, he stayed true to his identity as a bebopper. Feeling that the American marketplace had no use for him (at a time when he was also having marital and tax troubles), he left for Europe, where he became a celebrated jazz elder.

“It’s not like I’m looking to prove anything anymore,” he said in a 1993 interview. “At this age, what can I prove? I’m concentrating more on the beauty in the music, the humanity.”

Indeed, Mr. Griffin’s work in the 1990s, with an American quartet that stayed constant whenever he revisited his home country to perform or record, had a new sound, mellower and sweeter than in his younger days.

Johnny Griffin was born in Chicago on April 24, 1928, and grew up on the South Side. He attended DuSable High School, where he was taught by the famed high school band instructor Capt. Walter Dyett, whose other students included the singers Nat (King) Cole and Dinah Washington and the saxophonists Gene Ammons and Von Freeman.

Mr. Griffin’s career started in a hurry: at age 12, attending his grammar school graduation dance at the Parkway Ballroom in Chicago, he saw Ammons play in King Kolax’s big band and decided what his instrument would be. By 14 he was playing alto saxophone in a variety of situations, including a group called the Baby Band with schoolmates, and occasionally with the blues guitarist and singer T-Bone Walker. At 18, three days after his high school graduation, Mr. Griffin left Chicago to join Lionel Hampton’s big band, where he switched from alto to tenor. From then until 1951 he was based in New York City but mostly on the road.

By 1947 he was touring with the rhythm-and-blues band of the trumpeter Joe Morris, a fellow Chicagoan, with whom he made the first recordings for the Atlantic label. He entered the United States Army in 1951; stationed in Hawaii, he played in an Army band.

Mr. Griffin was of an impressionable age when Charlie Parker and Dizzy Gillespie became forces in jazz. He heard them both with Billy Eckstine’s band in 1945 and, having first internalized the more balladlike saxophone sound earlier popularized by Johnny Hodges and Ben Webster, became entranced by the lightning-fast phrasing of bebop, as the new music of Parker and Gillespie was known. In general his style remained brisk but relaxed, his bebop playing salted with blues tonality.

Beyond the 1960s his skill and his musical eccentricity continued to deepen, and in later years he could play odd, asymmetrical phrases, bulging with blues honking and then tapering off into state-of-the-art bebop, filled with passing chords.

In the late 1940s he befriended the pianists Elmo Hope, Bud Powell and Thelonious Monk; he called these friendships his “postgraduate education.” After his Army service he went back to Chicago, where he worked with Monk for the first time, a job that altered his career. He became interested in Monk’s brightly melodic style of composition, and he ended up as a regular member of Monk’s quartet in New York in 1958. In 1967 he toured Europe with a Monk octet.

Mr. Griffin joined Art Blakey’s Jazz Messengers for a short stint in 1957. The following year he began recording a series of albums as a leader for the Riverside label. On “Way Out!,” “The Little Giant” and other Riverside albums, his rampaging energy got its moment in the sun on tunes like “Cherokee,” famous vehicles for testing a musician’s mettle.

A few years later he hooked up with Davis, a more blues-oriented tenor saxophonist, with whom he made a series of records that act as barometers of taste: listeners tend to find them either thrilling or filled with too many notes. The Griffin-Davis combination was a popular one, and the two men would sporadically reunite through the ’70s and ’80s.

Mr. Griffin left the United States in 1963, settling in Paris and recording mostly for European labels — sometimes with other American expatriates, like the drummer Kenny Clarke, and sometimes with European rhythm sections. In 1973 he moved to Bergambacht, the Netherlands. He moved to the Côte d’Azur with his second wife, Miriam, in 1980, and then in 1984 to Availles-Limouzine, near Poitiers in midwestern France, where he lived thereafter.

In addition to his wife, Mr. Griffin’s survivors include four children: his daughters Jo-Onna and Ingrid and a son, John Arnold Griffin, all of the New York City area, and another daughter, Cynthia Griffin of Bordeaux, France.

Mr. Griffin stayed true to the small-group bebop ideal with his American quartet, including the pianist Michael Weiss and the drummer Kenny Washington. The record he made with this group for the Antilles label in 1991, “The Cat,” was received warmly as a comeback.

Every April for many years, Mr. Griffin returned to Chicago to visit family and play during his birthday week at the Jazz Showcase. During those visits he usually also spent a week at the Village Vanguard in New York, before returning home to his quiet house in the country. "
Posted by Arnaldo DeSouteiro at 2:58 PM