Hiram Bullock - top guitarist, top entertainer, top showman
(born September 11, 1955, Osaka/Japan;
died July 25, 2008, New York, NY, USA)
I'm very schocked and extremely sad with the news about the passing of Hiram Bullock. In my record collection, I own over a hundred albums on which he appears. And I had the privilege to attend many of his live performances both as a leader (mostly in New York clubs, including the last gig at Zanzibar the night the club was closing in 1991) and as a "star sideman" all over the world with Gil Evans, David Sanborn, Bob James and many more.
Among my personal favorite sessions on which he took part are: "Dune" (David Matthews), "Turn This Mutha Out" and "Boogie to the Top" (both by Idris Muhammad), "Hanalei Bay" (Lew Soloff), "Carla" (Steve Swallow), "Night-Glo" (Carla Bley), "Something You Got" (Art Farmer with Yusef Lateef), Airto's "Killer Bees", Bob James' "All Around the Town", John Blair's "We Belong Together", many albums by Sanborn, Jaco Pastorius, Michael Franks, Gil Evans' Monday Night Orchestra etc etc.
IMHO, his best live performance ever is documented on the track "Smile" from David Sanborn's "Love & Happiness" DVD (see details above) 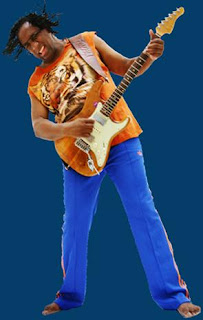 ********
Over the course of his career, from his mid ‘70s run with The Brecker Brothers to his various stints as a “hired gun” for everyone from Gil Evans and David Sanborn to Billy Joel and James Brown, Hiram Bullock earned his reputation as a bona fide guitar hero. But all along, Hiram has also been developing his skills as a singer/songwriter and charismatic live performer. His style is not easily categorized, since his playing was a creative blend of rock, funk, blues, and jazz. It is easy to say, however, that his music was fun!
Hiram Bullock was born in Osaka, Japan and came to America at the age of 2. As a child, he studied piano at the Peabody Conservatory of Music in Baltimore, Maryland, playing his first recital at the age of 6. He learned to play the saxophone at age 11, and began playing the bass guitar in junior high school rock bands as a teenager. He switched to guitar at age 16, admittedly “to meet more girls”. Hiram attended the University of Miami music school, where he studied with Pat Metheny and Jaco Pastorius, and where he met many of the musicians that he would play with throughout his professional career. One of his steady nightclub gigs was with the singer Phyllis Hyman, and this eventually led him to New York.
Almost immediately after arriving in the Big Apple, Hiram’s international career began. He first played with David Sanborn, meeting producer Phil Ramone and playing on many gold and platinum albums. His credits include: The Brecker Brothers, David Sanborn, Paul Simon, Chaka Khan, Pete Townsend, Bob James, Sting, James Brown, Miles Davis, Kenny Loggins, Billy Joel, Barbra Streisand, Burt Bacharach, Roberta Flack, Spyro Gyra, Eric Clapton, Al Green and James Taylor. He has worked with many others; a full discography can be found on http://www.allmusic.com/

Hiram gained a huge following as the barefoot guitar player on Late Night with David Letterman. From the inception of the show until 1984, he was a regular member of the World’s Most Dangerous Band, led by Paul Shaffer. Other television work includes being a member of the house band on Saturday Night Live, and working as the musical director on David Sanborn’s critically acclaimed Night Music show. He was also seen acting the part of a musician in Under Siege (starring Steven Segal); he wrote 6 of the internal songs in the film.

Hiram’s career as a solo artist began in 1983. He produced all of his albums, which include many of his own songs. His albums span many different genres of music, from the contemporary jazz of “From All Sides” to the rock of “World of Collision”; from the latin-influenced “Carrasco” to the organ-trio jazz of “Late Night Talk”. The style that Hiram’s fans have come to expect in live performances is exemplified by the group-oriented funky rock of “Color Me”, and continued with “Try Livin’ It” and his latest release, “Too Funky 2 Ignore”. He was also known as a dynamic performer, who gives his all for the sake of the show. His last touring was with the "Gil Evans Orchestra" (aka "The Miles Evans Orchestra", since it's led by trumpeter Miles Evans, Gil's son) in Europe, where they performed at Rome's "House of Jazz" on July 13.
****************
http://www.independent.co.uk/news/obituaries/hiram-bullock-charismatic-jazzrock-guitarist-878716.html

Hiram Bullock was a talented and charismatic guitarist, a rock'n'roller with a jazz head who bridged the world of sophisticated pop and the avant-garde New York jazz scene.
A super-session player, Bullock was mentored by the producer Phil Ramone, and his work can be heard on Steely Dan's Gaucho (1980), Paul Simon's One Trick Pony (1980), Sting's Nothing Like the Sun (1987), Billy Joel's The Stranger (1977) and Barbra Streisand's A Star Is Born (1976). He also played with the Brecker Brothers, Jaco Pastorius, Chaka Khan, James Taylor, James Brown and Al Green, among many others. He was a member of one of Miles Davis's last touring groups, and his guitar graced countless jazz albums. Hiram Bullock also put out over a dozen records under his own name.
Bullock was a consummate showman: his live performances were enhanced by his habit of wandering deep into the crowd whilst soloing. "Rock'n'roll guitarists might do that," said the promoter John Cummings, "but it wasn't common at jazz shows. You'd find a sedate jazz audience in Switzerland where the uptight burghers would be surprised by Hiram sitting on their daughters' laps whilst continuing to play. He invented himself as a jazz-rock guitarist and entertainer."
Did such live ostentation from the guitarist reflect the origins of his choice of instrument? "I played bass in my high school rock band (like a million other teenage boys)," Bullock said. "One day our guitarist, who was slightly older and looked like Eric Clapton, passed out while in the middle of the solo on 'Mississippi Queen' (he said later that he was 'tired'). Immediately, 10 girls jumped up onto the stage, stroking, consoling and otherwise 'reviving him'. At that precise moment I decided to switch to guitar."
Hiram Bullock was born in 1955 in Osaka, Japan to parents serving in the US military. When he was two the family returned to the United States, where they settled in Baltimore, Maryland. Hiram studied piano at the Peabody Conservatory of Music in the city, playing his first recital at the age of six. He also became a fluid saxophone player, and finally made the switch from bass to guitar at 16.
At the celebrated University of Miami music college, Bullock studied alongside Pat Metheny, Jaco Pastorius and Will Lee, discovering musical soul-mates. He paid his way at university by playing nightclub gigs in Florida, and hooked up with the singer Phyllis Hyman. When she landed a recording deal and moved to New York, Bullock went with her.
In Manhattan he made an immediate impact. 'He was a phenomenon,' remembered Jamilla Samuels, a sound engineer at the Mix Studio. "All the players were talking about this new cat in town with this great guitar style. If you had a buzz like that amongst the musicians, it meant you were good. But I noticed that straightaway he fell in with the fast crowd."
Soon Bullock was playing with the master saxophonist David Sanborn and the Brecker Brothers band. He then formed the 24th Street Band with the drummer Steve Jordan, the keyboardist Clifford Carter and bassist Mark Egan, later replaced by Will Lee. Very popular in Japan, the 24th Street Band released two records there, with the keyboard player Paul Schaffer producing the second. Schaffer recruited Bullock, Jordan and Lee for his group the World's Most Dangerous Band, which played on the talk show Late Night With David Letterman from the programme's début in 1982, bringing to national attention the guitarist's habit of performing barefoot.
Other habits also revealed themselves. Bullock was known to suffer from an occasional "attendance problem" on the Letterman show, a consequence of the drug binges associated with the crowd he was hanging out with. He was no stranger to heroin and cocaine, but found his drug of choice when the crack epidemic swept the United States in the mid-1980s.
Most of the time, however, he kept it together. Tour managing him with Carla Bley's group and then with the Gil Evans Orchestra, John Cummings recalled his energetic extroversion: "He used to really tear it up playing with Carla, and even managed to persuade Van Morrison to perform Hiram's own arrangement of Moondance at Gil Evans' 75th birthday concert. He was a great player and a fantastic guy, and he was completely clean."
Yet the effects of Bullock's recreational pursuits soon became evident in his physical shape. From having once seemed the thinnest man on the planet, his body ballooned unflatteringly. His work did not suffer, and he continued to make great records, notably Late Night Talk (1996), an organ session featuring Lonnie Smith on the Hammond B-3, and Try Livin' It (2003), a funk-rock record that highlighted his songwriting skills.
In the autumn of 2007 Bullock was diagnosed with cancer. But his cast-iron constitution pulled him through, and he made a full recovery, setting off immediately on a lengthy tour with the Miles Evans Orchestra. There were no signs of post-operation fatigue; Bullock was playing at his peak. But the old problems remained. The attempt to maintain the post-performance high after the tour's end resulted in another crack binge, one that his depleted body was simply no longer able to endure.
Hiram Law Bullock, guitarist and songwriter: born Osaka, Japan 11 September 1955; married (two stepsons); died New York 25 July 2008.
Posted by Arnaldo DeSouteiro at 7:02 AM