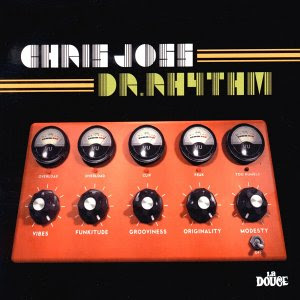 CD of the Day
Chris Joss: "Dr. Rhythm" (Irma La Douce) 2002
Excellent groovy album composed and performed by Chris Joss, a French producer & multi-instrumentalist heavenly influenced by the 70s sound of such mythical (why not say "mystic" too?) labels as CTI, Kudu and Blue Thumb. But Monsieur Joss proves to able to recycle all those inspirations in a sound of his own, creating a fascinating sonic landscape. My personal favorite tracks are "The Gnomes" (Azymuth and Herbie Hancock would be proud of signing it), "The Sequel", "Bakara" (featured on the "Lounge Mon Amour" compilation) and the joyful "Wooly Waltz" (echoes of Lalo Schifrin - from his Dot years - and other soundtrack heroes).
Posted by Arnaldo DeSouteiro at 11:09 AM