Well, the George Russell that passed away last week was brought to my attention through my dear friends Luiz Bonfá and João Palma. He was a subtle and highly skilled guitarist who was a member of the Nelson Riddle Orchestra for many years, recorded many TV and movie soundtracks, worked with such singers as Helen Merrill and Johnny Matthis (with whom he delevoped a long collaboration), and released a couple of solo albums.


His "Birthstone Suite", performed by the Royal Philharmonic Ensemble conducted by John Keating, came out on CD in 1988, mastered by Bernie Grundman for the USA Music Group.


The CD "George Russell, His Guitar & Music", released in 1992 also by the USA Music Group, comprised two different sessions. The first ten tracks assembled as "Phase One", reveal the big influence of acoustic guitarists like Bonfá and mainly Laurindo Almeida, who also was a big inspiration as a composer. Just check the many bossa nova-influenced tunes on the album, arranged and conducted (at Amigo Studios in North Hollywood) by Jimmie Haskell, who played keyboards too.

Russell is backed by a stellar cast which includes Victor Feldman on piano and "quica" (sic - the "cuica" being heard on the tracks "Talk'n Talk'n Talk" and "Brazilian Bus"), Shelly Manne on drums, Dennis Budimir on rhythm guitar, and two Brazilians who were members of the original incarnation of Sergio Mendes & Brasil 65: João Palma and the late José Soares (Suarez).

"Phase Two", the second part of the CD, was recorded in London with the Ted Heath Orchestra and arrangements by John Keating, often featuring a singer simply credited as "Sylvia", whose wordless vocals are very similar to Mary Mayo's performances on Dick Hyman's "Moon Gas" album. 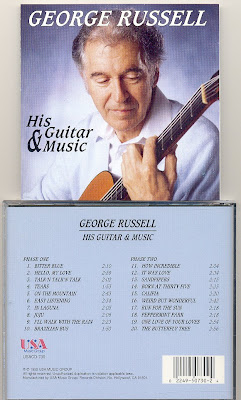 George H. Russell, a veteran record promoter, guitarist and composer, died of a heart attack July 19 at his home in Laguna Beach, said Sandra Gillard, his companion. He was 89.

Russell was commissioned to write the music for "Encounter Near Venus," a children's story ballet presented by Ballet Pacifica in Orange County in 1975. He also composed music for two other ballets, "Birthstone Suite" and "Mah Jong."

Russell recorded two solo guitar albums, which were combined in 1994 as "George Russell: His Guitar and Music" and included 20 original compositions.

Russell, whose sister was actress Gail Russell, was born in Chicago Feb. 7, 1919. He formed his own band at 16called the Hyde Parkers, which appeared on Major Bowes' "Original Amateur Hour" and toured with one of Bowes' traveling companies.

In the late '40s, he helped form an instrumental and vocal trio called the Bachelors, which recorded for MGM Records and Palace Records before disbanding in the mid-'50s.

Russell, who played guitar in recording sessions with the Nelson Riddle Orchestra, among others, launched his career as a record promoter in the late '50s. He worked first for Mercury Records, then for Capitol and Columbia before becoming an independent record promoter.

Among the artists he promoted were the Platters, Nat King Cole, Frank Sinatra, the Beach Boys, Tony Bennett and Willie Nelson. Until his death, Russell continued to promote Johnny Mathis through a professional relationship that began in 1961.
Posted by Arnaldo DeSouteiro at 11:56 AM

What a beautiful and insightful comment on a little known, but deeply creative gentleman. His talent knew no boundaries, and his whole life was dedicated to 'the music'. The heavens are richer, for the presence of George Harrison Russell.