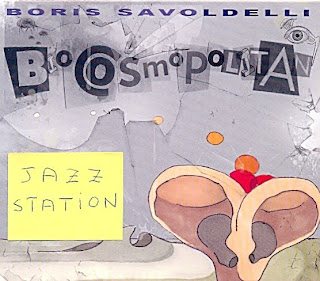 Another impressive set by the most adventurous male vocalist in the contemporary jazz scene. Period.

Boris Savoldelli’s new release "Biocosmopolitan" is nothing short of a tour de force of vocal artistry. Listeners who are only familiar with the singer’s previous MoonJune CD – the edgy, shape-shifting "Protoplasmic" duets with guitar innovator Elliott Sharp – will be little prepared for the euphonious aural feast that awaits them on "Biocosmopolitan," which represents a new pinnacle for this unique and wholly engaging vocal performer. Besides the 16 tracks, the CD also includes a 8-minute long bonus video clip, "The Miss Kiss," which can be viewed here: http://www.themisskiss.eu/home.php?lan=en

In Italy, Savoldelli studied operatic vocal techniques with Simona Marcello and, more recently, in New York, he's refined his art with singers Jay Clayton and Mark Murphy. Savoldelli is also a member of the innovative avant jazz-rock combo SADO, and released the acclaimed solo album "Insanology" in 2008, a feast of inspired vocal-orchestral loop-layering, featuring a guest appearance by guitarist Marc Ribot, followed by "Proptoplasmic" (2009) on MoonJune. In both occasions, Boris Savoldelli appeared among the top male vocalists of the year in the Jazz Station Polls, placing 3rd in 2008 and 2nd in 2009. Since he didn't release a new album last year, he became ineligible in 2010.

"Biocosmopolitan" would be a remarkable album even if it were performed by a large ensemble of singers and instrumentalists, but the fact that these intricately layered songs were performed in real time by a single vocalist – apart from the brilliant contributions of Italian trumpet star Paolo Fresu on two tracks, fusion bass ace Jimmy Haslip (Yellowjackets, Sadao Watanabe) on another, Savoldelli’s own piano accompaniment on “Biocosmo,” and subtle use of sound-effects recordings – is difficult to believe.

Using only a microphone and a compact, customized setup of looping and sound-processing devices, Savoldelli constructs exquisitely crafted, self-contained sound-worlds replete with elaborate multipart harmonies, complex interlocking rhythms, and a panoply of globe-spanning musical influences old and new, ranging from vintage jazz crooning and calypso to Renaissance polyphony, R&B, South African mbaqanga choral music, psychedelic rock, Beat poetry, his native Italian folk heritage, and a sort of mutant doo-wop. Seldom has vocal music been heard that conjures both the Beach Boys and Stockhausen in the same track. What unifies all of these wildly varied influences is Savoldelli’s inimitable, outgoing musical personality.

Unlike "Protoplasmic," an improvised outing that explored what Boris refers to as his “dark” side, "Biocosmopolitan" is a much more exuberant and accessible affair, and presents the most complete portrait of Savoldelli as singer, composer, arranger, and sound manipulator to date. Deft use of looping enables the singer to accompany himself with a rich tapestry of choral and ‘instrumental’ sounds, as in his amazing emulation of longtime hero Jimi Hendrix’s strangulated, wah-fried guitar cries on a version of “Crosstown Traffic” like no other. Likewise, all of the sophisticated and entirely convincing drum and percussion sounds on "Biocosmopolitan" are produced by vocal cords, mouth, and lips alone.

While other singers have also emulated instrumental timbres using the human voice, none has taken this approach further or with such inventiveness as Savoldelli has on "Biocosmopolitan." With lyrics in Italian, English, and a nonverbal vocalese syntax of his own invention, "Biocosmopolitan" is continually enlivened by Savoldelli’s warm- hearted demeanor and infectious sense of humor, belying the worn-out stereotype that ‘avant-garde’ vocalizing is by definition strident and uninviting. This new album, scheduled for CD release in the USA on March 15, brilliantly demonstrates why Savoldelli has won over audiences throughout the world with his concerts of ‘one-man polyphony,’ while mapping out new frontiers for the human voice.
Posted by Arnaldo DeSouteiro at 6:29 AM