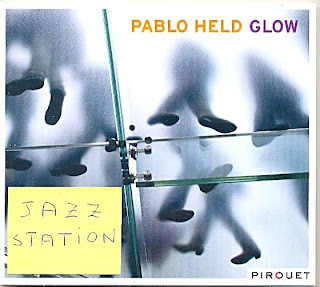 After two outstanding trio albums ("Forest of Oblivion" and "Music," which placed him high in the past Jazz Station Polls, being voted "Best New Talent" in 2008 and #5 top acoustic piano player in 2010), Pablo Held is now back with "Glow," an ambitious project produced & engineered by Jason Seizer, Pirouet's head. Contrast, color, and interaction: these are the essential catchwords that best capture the sense and sensibility of this new album, released in Europe last month. Pablo Held has created something big, both personally and musically, for a larger ensemble with unconventional instrumentation. There are no jazz standards in the 10-track program, which consists of new originals exclusively. All composed by Held himself, except "Wiegenlied" (written by his father Peter Held, himself a jazz and classical pianist) and "This Is What I'm Asking For" (Sandra Hempel).

Born on December 27th, 1986, pianist Pablo Held has won the first prize at Nordrhein-Westfalen's "Jugend Jazzt" three times - in 1999, 2003, and 2005, the first time as a twelve-year-old! He has played with, among others, the WDR Big Band, Manfred Schoof, Paul Heller, and Niels Klein. Held studied in Cologne with the outstanding German pianist Hubert Nuss. His debut album "Forest of Oblivion" was highly praised by the press. At the age of 23, he brings out his second CD, "Music" - and that previous remarkable profile is brought into even sharper perspective. And in March 2010 Pablo assembled nine musicians to record "Glow" in the broadcast hall of the German Radio in Cologne.
Posted by Arnaldo DeSouteiro at 12:51 PM