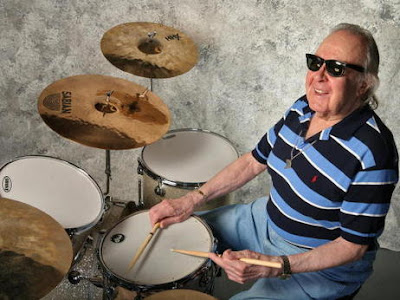 Joe Morello dies at 82; jazz drummer for Dave Brubeck Quartet
'Drummers worldwide remember Joe as one of the greatest drummers we have known,' Brubeck says. '… His drum solo on "Take Five" is still being heard around the world.'
By Keith Thursby, Los Angeles Times
March 14, 2011 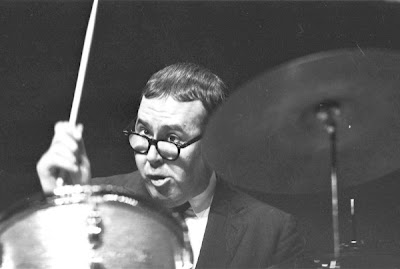 Joe Morello, seen in 1966, was "a drummer’s drummer. You could talk to almost any drummer and he’d probably be on their list of the drummers they admire most,” says jazz critic Don Heckman. (Associated Press / March 12, 2011)

Joe Morello, the jazz drummer best known for his work with the influential Dave Brubeck Quartet on such classic recordings as "Take Five," has died. He was 82.

Morello died Saturday at Trinitas Regional Medical Center in Elizabeth, N.J., said his wife, Jean. No cause was given.

The quartet, with Brubeck on piano, Paul Desmond on alto saxophone, Eugene Wright on bass and Morello on drums, became successful beginning in the late 1950s exploring unusual time signatures. The album "Time Out," which included "Take Five" with Morello's memorable solo and "Blue Rondo á la Turk," became one of the most popular jazz albums ever.

"Drummers worldwide remember Joe as one of the greatest drummers we have known. He was a good friend," Brubeck said in a statement Sunday. "Many people consider the rhythm section of Eugene Wright and Joe Morello in my quartet as being one of the most consistent, swinging rhythm sections in jazz.... His drum solo on 'Take Five' is still being heard around the world."

Morello told Canada's Kingston Whig-Standard newspaper in 2007: "Someone said that drum solo changed the way people drummed because it was more of an abstract solo. We'd use that to close the concert and always get a standing ovation."

Morello was born July 17, 1928, in Springfield, Mass. His vision impaired since birth, he studied the violin before switching to drums in high school. He moved to New York in the early 1950s and worked briefly with Stan Kenton, among others, before becoming a member of pianist Marian McPartland's trio.

Morello joined Brubeck's quartet in the mid-1950s, turning down offers from the Benny Goodman and Tommy Dorsey bands.

"Joe was a drummer's drummer. You could talk to almost any drummer and he'd probably be on their list of the drummers they admire most," jazz critic Don Heckman said Sunday. "He played with such sensitivity and accuracy, and he was always a support for what was happening while keeping the rhythm alive."

Ed Shaughnessy, a longtime friend who played drums in the "Tonight Show" band for 29 years, told The Times on Sunday that Morello "developed a style of his own and never played in anything but good taste. He was an ardent practicer. And he got great results."

After Brubeck disbanded the group in 1967, Morello continued to play but primarily was a teacher. His students over the years included Max Weinberg, who gained fame playing with Bruce Springsteen and leading talk-show host Conan O'Brien's band.

Weinberg, in an interview with The Times on Sunday, said he started studying with Morello in the late 1970s. "I sought Joe out. He was a drum guru," Weinberg said. "He took me from a very talented amateur to a pro who could field any kind of musical question asked of me."

Morello appeared on more than 120 recordings, according to a biography on his website.

"For us, the guys in the original classic quartet were like our uncles," one of Brubeck's sons, composer and musician Chris Brubeck, told The Times on Sunday. "Joe was able to master all the odd-time signatures that Dave wanted to explore. Just an amazing player."

Morello's wife was his only immediate survivor. 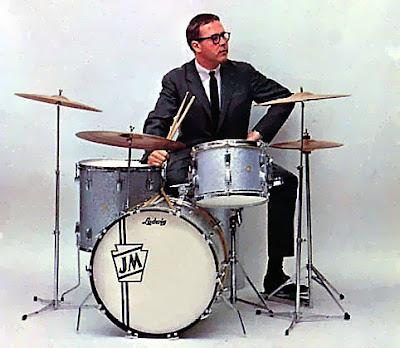 http://www.joemorello.net/bio.shtml
It is with great sadness that we report Joe's passing on March 12, 2011.
His impact on the world of music and on all those whose lives he touched will live forever.

Joe was born on July 17, 1928, in Springfield, Mass. Having impaired vision since birth, he devoted himself to indoor activities. At the age of six, his family’s encouragement led him to study violin. Three years later, he was featured with the Boston Symphony Orchestra as soloist in the Mendelsohn Violin Concerto. At the age of twelve, he made a second solo appearance with the orchestra. But upon meeting and hearing his idol, the great Jascha Heifetz, Joe felt he could never achieve “that sound”. So, at the age of fifteen, Joe changed the course of his musical endeavors and began to study drums.

Joe’s first drum teacher, Joe Sefcik, was a pit drummer for all the shows in the Springfield area. He was an excellent teacher and gave Joe much encouragement. Joe began sitting in with any group that would allow it. When he was not sitting in, he and his friends, including Teddy Cohen, Chuck Andrus, Hal Sera, Phil Woods and Sal Salvador, would get together and jam in any place they could find. Joe would play any job he was called for. As a result, his musical experiences ranged from rudimental military playing to weddings and social occasions. Eventually, Mr. Sefcik decided it was time for Joe to move on. He recommended a teacher in Boston, the great George Lawrence Stone.

Mr. Stone did many things for Joe. He gave Joe most of the tools for developing technique. He taught Joe to read. But most important of all, he made Joe realize his future was in jazz, not “legitimate” percussion, as Joe had hoped. Through his studies with Mr. Stone, Joe became known as the best drummer in Springfield, and rudimental champion of New England.

Joe’s playing activity increased, and he soon found himself on the road with several groups. First, there was Hank Garland and the Grand Old Opry, and then Whitey Bernard. After much consideration, Joe left Whitey Bernard to go to New York City.

A difficult year followed, but with Joe’s determination and the help of friends like Sal Salvador, Joe began to be noticed. Soon he found himself playing with an impressive cast of musicians that included Gil Melle, Johnny Smith, Tal Farlow, Jimmy Raney, Stan Kenton and Marian McPartland. After leaving Marian McPartland’s trio, he turned down offers from the Benny Goodman band and the Tommy Dorsey band. The offer he chose to accept was a two-month temporary tour with the Dave Brubeck Quartet, which ended up lasting twelve-and-a half years. It was during the period that Joe’s technique received its finishing touches from Billy Gladstone of Radio City Music Hall.

From 1968, when the Dave Brubeck Quartet disbanded, Joe spread his talents over a variety of areas. He maintained a very active private teaching practice. Through his association with DW Drums, Joe made great educational contributions to drumming, as well as the entire field of jazz, by way of his clinics, lectures and guest solo appearances. In his later years, Joe frequently performed with his own group in the New York metropolitan area.

Joe appeared on over 120 albums and CDs, of which 60 were with the Dave Brubeck Quartet. He won the Downbeat magazine award for best drummer for five years in a row, the Playboy award seven years in a row, and is the only drummer to win every music poll for five years in a row, including Japan, England, Europe, Australia and South America. He is mentioned in Who’s Who in the East, twelfth edition, and the Blue Book, which is a listing of persons in the United Kingdom, Ireland, Canada, Australia, New Zealand and the United States who have achieved distinction in the arts, sciences, business or the professions. Revered by fans and musicians alike, Joe was considered to be one of the finest, and probably one of the most celebrated, drummers in the history of jazz.

Joe's impact on the world of music, and on all the lives of those he touched will live forever. 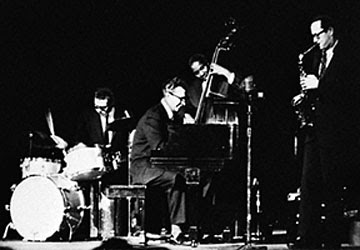 Drummer Joe Morello, one of jazz’s under-sung heroes, has died. Best known as the rhythmic timekeeper of multiple times in Dave Brubeck’s famed quartet, when the quartet made some of its best-known recordings, Morello had lately become an in-demand clinician, teacher and bandleader whose former students numbered Danny Gottlieb, Max Weinberg, Gary Feldman and Jerry Granelli.

Morello suffered from impaired vision from birth, and devoted himself to indoor activities. At six years old he began studying the violin, going on to feature three years later as soloist with the Boston Symphony Orchestra, playing Mendelssohn's Violin Concerto, and again three years later.

At the of age 15 Morello met the violinist Jascha Heifetz and decided that he would never be able to equal Heifetz's "sound," so switched to drumming, first studying with a show drummer named Joe Sefcik and then George Lawrence Stone, author of the noted drum textbook Stick Control for the Snare Drummer.

Stone was so impressed with Morello's ideas that he incorporated them into his next book, Accents & Rebounds, which is dedicated to Morello. Later, Morello studied with Radio City Music Hall percussionist Billy Gladstone.

After a period playing in McPartland's trio, Morello declined invitations to join both Benny Goodman and Tommy Dorsey's band, favoring a temporary two-month tour with the Dave Brubeck Quartet in 1955.

However, Morello remained to play with Brubeck for well over a decade – helping the Brubeck quartet score its biggest hits, including the well-known “Take Five” from the 1959 album Time Out - only departing in 1968.
Posted by Arnaldo DeSouteiro at 6:19 AM