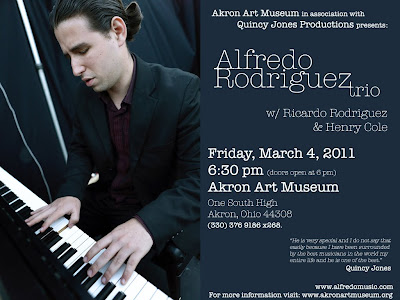 He has built an enormous presence in China after co-writing, with Quincy Jones, the song “Better City, Better Life”, which w as chosen to be the Official Theme Song of the 2010 Shanghai World Expo. He has since played to influential crowds at the 2010 Shanghai Film Festival and the 2010 Shanghai Tourist Festival. Alfredo’s debut CD is set to be released in early 2011 on Quincy Jones' Qwest label with Alfredo’s influences from Bach, Beethoven, and Stravinsky to Thelonious Monk, Bill Evans, Herbie Hancock, and Quincy Jones being displayed prominently. In his words, “Everything I learn, in all aspects of my life, contributes to my music.” In the words of Quincy Jones, “He is very special and I do not say that easily because I have been surrounded by the best musicians in the world my entire life and he is one of the best.”

For more details, please vist www.alfredomusic.com
Posted by Arnaldo DeSouteiro at 6:02 AM