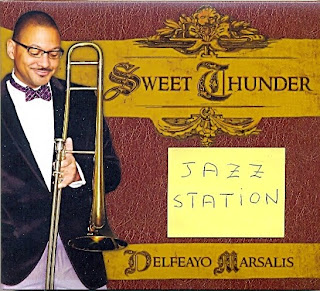 An ambitious reconstruction of Duke Ellington's homage to William Shakespeare ("Such Sweet Thunder"), this superb CD brings Delfeayo Marsalis' prodigious talents as a trombonist, composer, and producer to bear. Leading an all-star group of musicians including brothers Branford and Jason Marsalis, plus Mulgrew Miller, Victor Goines, Charnett Moffett, Tiger Okoshi, Mark Gross, Reginald Veal, David Pulphus, and Winard Harper, among others, Marsalis gives Ellington's work a personal twist while honoring the Duke's original intentions. In addition to the brilliant compositional aspects, Marsalis' performance confirms his position as one of the world's top trombonists. I've been a big fan of his work since his first solo album, "Musashi," cut in 1996 for the Japanese label Paddle Wheel, and he has always released outstanding albums. The challenging task of reinventing "Sweet Thunder" is another triumph!

It will certainly make the lists of the best jazz albums of the year. The overall quality of the project, co-produced by Delfeayo himself in association with jazz historian Phil Schaap, is beyond words. The team of recording, mixing & mastering engineers (the album was cut in NYC in 2008) also did a fantastic job. And the deluxe digipak CD artwork design, by the JAM Creative from New Orleans, is simply wondrous. Delfeayo's breathtaking approach in the trombone is welcoming and highly creative, combining the lyricism of Jack Teagarden and Tyree Glenn with the modern touch of J.J. Johnson and Curtis Fuller. Both the written parts and the improvised solos are of the highest level, reaching the perfect balance between creativity and respect for the original scores. Mark Gross, who plays with Delfeayo since "Musashi," shines as one of the most inspired soloists, and the contributions of pianists Mulgrew Miller and Victor "Red" Atkins, Japanese trumpet master Tiger Okoshi, reed player Jason Marshall and sax giant Victor Goines are equally impressive.

Besides all the info contained in the liner covers, there's also a beautifully designed booklet which includes a big "Duke, Shak & Delf" illustration by Chris Osborne, many colored pics of the musicians, extensive liner notes by Delfeayo himself -- commenting each and every tune, each and every interpretation -- and, last but not least, three letters signed by writer Jack Chambers (author of "Bardland: Shakespeare in Ellington's World" and head of the Department of Linguistics from the University of Toronto), Monsignor John Sanders, and the veteran jazz maestro/composer Gunther Schuller, the only one who adopts a surprisingly "purist" feeling against the adaptation of any Ellington work. But I'm sure that Delfeayo's project will stand the test of time.
************
From his first solo album in Japan ("Musashi") and his debut as a leader in the U.S. ("Pontius Pilate's Decision"), Marsalis has been a conceptually ambitious composer and player. "Sweet Thunder" re-affirms his ability to make innovative and daring music within and beyond the jazz tradition. Marsalis, a recipient of the 2011 NEA Jazz Masters Award, will also tour with his theatrical jazz production of "Sweet Thunder" in 2011.

William Shakespeare's work defined the scope and depth of English and world literature in a way that remains immediate and powerful to this day; similarly, Duke Ellington's work outlined what American music could become and laid out the key elements that still define jazz. In 1957, Ellington and collaborator Billy Strayhorn were invited by the Stratford (Ontario) Shakespeare Festival to compose music in tribute to Shakespeare. They came up with "Such Sweet Thunder," which yielded, among other pieces, the poignant portrait of Romeo and Juliet, "Star Crossed Lovers."

Driven by a long-term affinity for both Duke and the Bard, Delfeayo (pronounced like Romeo) Marsalis studied literature on the masters' level at the University of New Orleans, where he nurtured his love for William Shakespeare. While later earning his masters degree in jazz performance at the University of Louisville, the connection was made between the Bard and the Duke in the form of a thesis paper relating the two, and was inspired to create a fresh new interpretation of "Such Sweet Thunder."

"I've always believed that each generation is responsible for preserving and furthering the work of their forefathers while maintaining originality," he says. While researching at the Smithsonian Institute in D.C., Marsalis discovered the original scores from "Such Sweet Thunder."

"I am fairly certain Duke secured copies of these scores with the expectation that the material would be developed by a student of the music in the future. More than any other Ellington Suite, Thunder is extremely rich in melody, yet modest in development."

Rather than maintaining Ellington's original instrumentation, Marsalis chose to adapt the thematic material for octet. He states, "I am not at all a fan of repertory bands or the idea of 'recreationism.' The arranger's challenge is to keep the composer's essential elements while adding a degree of originality. Branford referred me to the Schoenberg Society reduction of Gustav Mahler's "4th Symphony" for chamber orchestra, Mahler's exact score orchestrated for fewer instruments. "Sweet Thunder" here has fewer instruments, but includes additional exposition and employs different grooves."

Ellington's musical portraits of Shakespeare's characters provide Marsalis an opportunity to delve deeply into the Bard's dramatic art. He states, "Duke & Shak were masters of form and thematic development who composed with creativity and humor." Whenever Marsalis takes license with the original score, he does so with good reason. The famous high note trumpet feature, "Madness in Great Ones," showcases Victor Goines on sopranino saxophone because "it sounds at least as irritating as a trumpet." Marsalis inserts a solo section that provides a nifty conversation between himself and Goines and explains, "In Shakespeare plays, there are individuals who either try to prevent or encourage a hero's inevitable descent into insanity. Duke captures the essence of Hamlet's state of madness, whereas I wanted to expose his going insane. Victor portrays Hamlet's ever-maddening state of mind, while I play the voice of reason. Ultimately, the solos grow in intensity until the logical pleas of my trombone are finally overtaken."

Marsalis has an uncanny knack for featuring soloists in their best light, an invaluable skill in producing programmatic music. For example, brother Branford's solos on "Half the Fun" and "Sonnet for Caesar" are structured like extended operatic arias. "Instead of focusing on Caesar's betrayal at the hands of Brutus, I asked Branford to first illustrate his unique character and loveable qualities; explore his greatness; and then reveal the twist of fate," Marsalis explains. "Similarly with Cleopatra in 'Half the Fun,' Branford develops his solo in the style of Art Blakey's Jazz Messengers, but using modern harmony and rhythms." Indeed, all of the soloists on Sweet Thunder state their respective cases with calm, cool and collected authority.

About "Sonnet in Search of a Moor" Marsalis says, "Duke's portrayal of Othello is a brief, introspective portrait, whereas ours exposes more about the man: a proud individual, a great leader, who eventually plunges into darkness caused by pride and jealousy." The vocal-style muted trombone on "Sonnet for Sister Kate" is supported by an African drum rhythm. "Star-Crossed Lovers" modulates twice to non-related keys to suggest the dramatic differences between Romeo and Juliet. Even the two compositions that retain their original structure, "Lady Mac" and "Up & Down," are treated to Marsalis' creatively humorous devices, as the sax solos on both use Clark Terry's original opening statement as a point of departure. In fact, upon hearing Sweet Thunder, Ellington trumpeter Clark Terry proclaimed, "Duke and Strayhorn would have loved this, y'all got it right!"

Marsalis draws inspiration from Ellington's inventive use of form in his own expanded interpretations of several of the movements. For the sonnets, Ellington kept the Shakespearean design of 10 notes (syllables) for 14 lines. In "Sonnet to Hank Cinq" Marsalis inserts a solo section after the 8th line (of 10 notes) and concludes with the last 6 lines after the solos. This point in the traditional sonnet is a break called the volta, which makes it logical place for an improvisational excursion. The solos consist of a medium tempo 10-bar blues in a major key alternating with a fast minor key section. The effect amplifies the contrast Ellington subtly suggests, creating a more intense pallet of expression. It also reflects Ellington's long propensity for taking the blues beyond its most standard 12-bar form. Another example is "The Telecasters," which keeps the soft-shoe dance form throughout solos that find trumpeter Tiger Okoshi and saxophonist Mark Gross at the top of their games.

Marsalis describes the closing "Circle of Fourths," as "a good reason to play fast in different keys! Duke composed it to pay homage to Shakespeare's greatness in comedy, tragedy, history, and poetry, but the title also refers to a musical progression. Each time we state the melody the song changes key, texture and tempo." The rhythm section of Victor "Red" Atkins, Charnett Moffett and Jason Marsalis support the soloists with fiery intensity that recalls the excursions of John Coltrane's classic quartet and Ornette Coleman's post-chordal approach.

"Sweet Thunder" is a major departure from the original "Such Sweet Thunder" to good effect - hard to imagine in the hands of a musician less versatile than Delfeayo Marsalis. Sensitive to the musical requirements, he explores the original material in the distinctive language of his native New Orleans, yet his melodic alterations and form additions are seamlessly composed and orchestrated.

A trombonist since the age of 13, Delfeayo Marsalis produced his first recording at age 17. With such a budding resume, it made perfect sense for him to attend Berklee College of Music, majoring in both performance and audio production. He has since produced over 100 major-label recordings by Harry Connick, Jr., Marcus Roberts, Spike Lee, and other members of the Marsalis family, several of which have received Grammy awards and nominations. For many years, Marsalis has been involved with youth education in various developmental programs. He founded Uptown Music Theatre in 2000 and implemented its Kidstown AfterSchool in three New Orleans grammar schools in 2009. In 2004, he obtained an MA in jazz performance at the University of Louisville and was conferred a doctorate by New England College in 2009.

In January 2011 Delfeayo Marsalis received the nation's highest jazz honor, being named an NEA Jazz Master along with his father Ellis and brothers Branford, Wynton and Jason. In 2011, he will tour with a special presentation of "Sweet Thunder" featuring actor Kenneth Brown, Jr. and a jazz octet, full stage set and costuming. "We'll relate Shakespeare's and Ellington's genius both theatrically and musically," Marsalis says. I can't wait to attend!

For more info about Delfeayo's career, please visit http://www.delfeayomarsalis.com
Posted by Arnaldo DeSouteiro at 6:29 AM