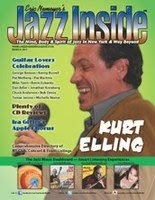 In the interview with Kurt Elling, he discusses his new recording on Concord, his touring and performing 200 dates a year, and perspectives about the music and the business.

Elling said: “…you grow and you change over time as a human being and if the music you decide to make is transparent and genuine, then what you produce as a musician and what you play in front of people is going to be reflected in that ... Obviously there is a segment of any artistry that has to do with being given a gift and sometimes several gifts but just about any portion of it, shy of the impetus, can be learned over time.”

The Guitar Lovers Celebration begins with Part Two of the interview by Ken Weiss with Kevin Eubanks. In addition to speaking about touring and growing up in a household full of music (his mother teaches piano and her brothers are Ray Bryant and Tommy Bryant), he discussed his bands and touring and more of his perspectives about the jazz world, jazz music and its presentation: “Everything about what we’re doing is just so antiquated and our vocabulary keeps us [jazz] in the past. … When you say a quartet to the rest of the world, nobody knows what you’re talking about. There’s no other music that’s identified by how many people are in the band. People just want to hear the music, but we keep putting a number on the band like it’s important.”

Dan Adler discusses his dual career in leading-edge development of computer chips and programs and guitar playing, including his latest CD with organist Joey DeFrancesco. Dan comments on jazz improvisation: “...playing jazz is one of the most emotionally and intellectually demanding activities a human being can ever perform. The level of preparation and concentration required to play a great jazz solo is no less than required, for example, to give a graduate-level lecture in physics. In both cases, you have to know the material through and through so that it’s automatic, and at every step you have to apply your creativity and rational thinking to present each idea clearly and make it flow from the previous idea.”

Guitarists Chuck Anderson and Bob Devos discuss their experiences studying in Philadelphia with the legendary Dennis Sandole. Devos goes on to talk about moving from the practice room to the bandstand, where he began to play with all of the great jazz organ players and influential stylists on all instruments: “Soloing was never a problem, making the other musicians happy was the industrial strength issue. I once described it as trial by fire. These musicians and audiences were tough. You delivered or you were out – and out fast.”

Jonathan Kreisberg offers an astute observation addressing one of the issues that get in the way of jazz artists connecting with audiences: “It’s really easy for us to forget that if we go too deep into the mechanics of music it can be easy to forget to “check in” with the outside world and really connect with folks.”

In that same vein Kenny Burrell comments about his experiences trying to share essential understandings with students: "The thing that we try and tell them is to search inside for those things that they are hearing—not just to play what they know will work. If they search for feeling, there’s a certain logic that will automatically happen”

Interviews with Pat Metheny, George Benson, Mike Stern and Pat Martino all shed light on this music we love, and the process of creation. Martino stated: “I was more interested in real-time living. I wanted to be in the presence of Wes Montgomery, I didn’t want to study him.”

Jerry Cohen, who heads up the Music Program at Five Towns College discusses their new Summer Graduate Program – with Intensified One-Week Courses focused on music and technology, leading to a Masters Degree in Music.

Ken Weiss reviews the recent (and final) Annual NEA Jazz Masters Awards Ceremony and performance. The NEA Jazz Masters Program has been cancelled, after presenting awards to 179 jazz artists since its inception in 1983. Ken also covers the performance by the Jim Hall Quartet, with Greg Osby, at The Iridium.

This month, in Apple Chorus, Ira Gitler talks about pianists Dado Moroni, Enrico Pieranunzi and new recordings that have struck his fancy.

Comprehensive monthly calendar and event listings for the number one jazz market in the world - New York - span 16 pages.

Jazz Inside Magazine is published monthly and is also available in print, free at 200 locations around the New York metro area, and by paid subscription for jazz fans.

SUBSCRIPTIONS
If you'd like Jazz Inside Magazine delivered to your door, along with periodic bonus CDs featuring tracks by leading and emerging artists, go here: http://jazzinsidemagazine.com/jazz-store/subscribe/ji-ny-magazine-subscription
Posted by Arnaldo DeSouteiro at 6:28 AM