"An Evening with Dave Grusin" out soon!


Arguably one of Dave Grusin's best orchestral albums ever, alongside such masterpieces as "NY/LA Dream Band" (why they don't reissue this landmark video/LaserDisc on DVD??? Eric Gale, Anthony Jackson, Steve Gadd and George Young play their asses off!), "West Side Story" and "The Gershwin Connection," a new project titled "An Evening with Dave Grusin" will be released here in the U.S. next April 26 by the Telarc label (only 6 days after the original release in Japan by Universal on April 20). The doemstic CD is already available for pre-order on Amazon through the link below:
http://www.amazon.com/Evening-Dave-Grusin/dp/B003VZ8I82/ref=sr_1_1?ie=UTF8&s=music&qid=1299770424&sr=8-1
Hope it will come out on DVD and Blu-ray formats soon too.

If you've spent any time at all in a movie theater or in front of a TV set during prime time over the past four decades, chances are good you've encountered Dave Grusin along the way. In addition to a formidable body of work as a jazz recording artist, this pianist, composer, arranger, and wi...nner of 10 Grammys, an Oscar, and has scored some of the most entertaining and enduring films of the past half-century, including The Graduate, Three Days of the Condor, On Golden Pond, Tootsie, The Champ, Milagro Beanfield War, The Firm, and many others. On the small screen, Grusin composed scores and themes for It Takes a Thief, The Bold Ones, Maude, Baretta, St. Elsewhere and other popular TV series. His jazz recordings have topped the charts for the past three decades.

Grusin steps out from behind the various machinations of film and television production to take center stage on An Evening with Dave Grusin, a groundbreaking live recording that captures him conducting and performing with a host of stars, and backed by the 75-piece Henry Mancini Institute Orchestra at the Adrienne Arsht Center in Miami, Florida, in December 2009. The album is a collection of 12 songs by Grusin, Leonard Bernstein, George Gershwin and Henry Mancini. Guest performers on the date include singers Jon Secada, Patti Austin & Monica Mancini (the latter singing on his father's classic song "Moon River", vibraphonist Gary Burton, Cuban trumpet virtuoso Arturo Sandoval, master flutist Nestor Torres and percussion ace Sammy Figueroa. 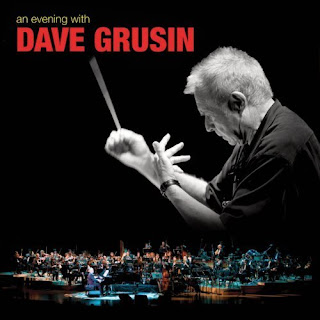 Posted by Arnaldo DeSouteiro at 7:02 AM