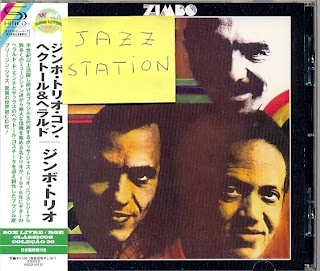 One of Brazil's most important groups ever, the São Paulo-based Zimbo Trio has built an impressive discography since the group was formed in 1964 by Hamilton Godoy (piano), Luiz Chaves (bass) and Rubens Barsotti (drums).

Besides the many great trio albums recorded for RGE in the 60s, they also released several projects with additional instrumentation, most notably the ones with strings arranged by the late Luiz Chaves (the two volumes of "Zimbo Trio + Cordas") and with a brass section ("Zimbo Trio + Metais: Decisão").

Eventually, they returned to the RGE label and released their masterpiece album in 1976, now reissued on SHM-CD for the very first time. In Japan, of course. The group became a quintet with the addition of two special guests: Argentinian saxophonist/flutist Hector Costita and guitar master Heraldo do Monte, a founding member of the legendary Quarteto Novo. And all the guys played their asses off...

The energy on this session is unbelievable, gives me goose bumps all the time. The repertoire is impeccable, including long versions of two Milton Nascimento's tunes ("Fé Cega, Faca Amolada" with Heraldo on the 12-string acoustic guitar, and "Viola Violar" on which he changes to the electric guitar), Paulo Tito's "Poliedro" (my personal favorite track, with incredible drum breaks and an oustanding Godoy solo on the acoustic piano, with hints of McCoy Tyner) plus four amazing originals composed specially for that session by the group members: "Tudo Bem" (Godoy), "Vai de Aracaju" (Barsotti), "Brincando" (Chaves) and "Laurecy, Até Já" (Barsotti/Godoy).

What grooves, what bass lines! Phenomenal solos! Textural and highly interactive conversations happen in all tunes, with the combination of flute & guitar sounding like a third instrument. Godoy, who was Eliane Elias' teacher & mentor, plays both acoustic & electric pianos. No overdubs, though. Sometimes soloing only with the right hand on the Fender Rhodes while keeping the left hand on the acoustic grand (like he does on a fascinating solo on "Vai de Aracaju"), sometimes playing the two instruments in unison ("Viola Violar"), like Keith Jarrett used to do with organ & electric piano during his years with Miles Davis. It's really one of the best instrumental albums in the history of Brazilian music. 5,000 stars!
Posted by Arnaldo DeSouteiro at 6:29 AM