Sinatra & Jobim: "The Complete Reprise Recordings" finally out on CD! 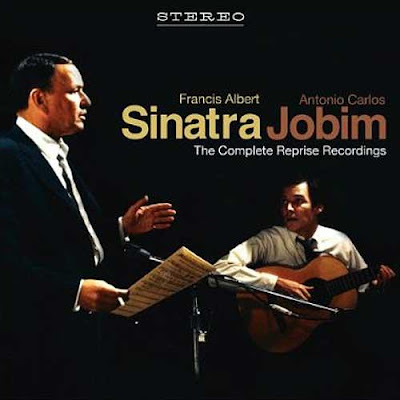 For the first time in over three decades, the Frank Sinatra/Antonio Carlos Jobim sessions are now together in "The Complete Reprise Recordings," the most comprehensive compilation of the Sinatra/Jobim sessions yet. The CD, scheduled for release in the USA on May 4, by Concord Records, includes all songs they cut together during the 1967 and 1969 sessions.
The 10 tracks from the first meeting, released on the "Francis Albert Sinatra & Antonio Carlos Jobim" LP, co-produced by Sonny Burke & Ray Gilbert, were arranged & conducted by Claus Ogerman, featuring Jobim on acoustic guitar & vocals, Don Payne on bass and Dom Um Romão on drums. None of the unreleased alternate takes are included on this forthcoming CD. 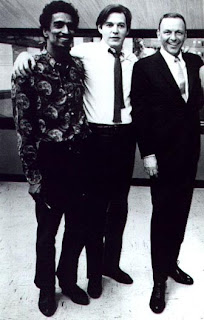 The second Jobim/Sinatra meeting, back in 1969, once again produced by Sonny Burke, yielded other 10 tracks, but, at the last minute, the singer's management decided to cancel the LP release.
(cover of the aborted 1969 LP)

Then, in 1971, 7 of those tracks were included in the "Sinatra & Company" album, which didn't include "Bonita," "Sabiá" (released on single format only in Italy!) and "Desafinado." All songs were arranged by Eumir Deodato and conducted by Morris Stoloff, since Sinatra, as usual, recorded everything "live", together with the orchestra, and Deodato was busy playing piano. The stellar cast of sidemen also included João Palma, Claudio Slon, Chico Batera, Chuck Berghofer, Ted Nash, Milt Bernhart, Paul Horn, Buddy Collette, Dick Nash, Ken Shroyer, Vincent DeRosa and Israel Baker, among many others.
We sincerely hope that this Concord CD will include complete data, since the musicians were uncredited in the original LP issues as well as in all subsequent digital reissues.

Anyway, "The Complete Reprise Recordings" is a must-have for any collector, and a new lifestyle for dedicated Sinatra/Jobim fans. Sinatra's voice has been heard around the world, and as it is matched flawlessly with the compositional genius of Antonio Carlos Jobim, his fame will continue to grow more than a decade after his passing.