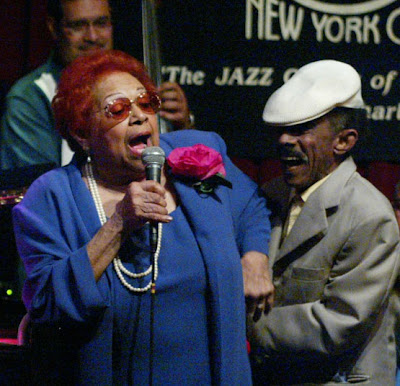 Graciela, the legendary “First Lady of Afro-Cuban Jazz”, has passed at the age of 94. Born Graciela Peréz-Gutierrez, she was one of the great voices in Afro-Cuban music, and died yesterday, April 7, in New York City, where she lived.

A pioneer in music, as a black Cuban woman, in a so-called 'man’s world' she opened doors for all those who followed her. She performed around the world, recording and sharing the stage with her foster brother Machito (Frank Grillo) and brother-in-law, Mario Bauzá (originator of the genre Afro-Cuban Jazz) in the world renowned orchestra “Machito and the Afro-Cubans.” Some of her biggest hits include “Ay, José”, “Si, Si, No, No”, “Noche de Ronda”, and “Novio Mio” among many others. Her storied career lasted 77 years. She died of renal and pulmonary failure with her dear friend, Mappy Torres, by her side. Her ‘big’ heart never gave out.

Graciela was primarily known for her tremendous voice, risqué and sassy stage presence and sexy double entendre lyrics. She sang ‘jazzy’ guarachas as easily as handling the most romantic of boleros which she could deconstruct like no other. She could sing it all, not just one style or fashion like other singers, as many critics and musicologists have mentioned. Graciela’s versatility and virtuosity were un-matched. Though her last name was Pérez-Gutierrez, she was only known by her one name moniker before it was fashionable to do so in more modern times.

Born in Havana, Cuba on August 23, 1915, she was christened a “singer” at age five by the trova singer/composer Maria Teresa Vera and taught to sing by her older foster brother Machito. Graciela commenced her career at 17 with the most popular of female orchestras “Anacaona” which was comprised of 10 sisters from the Castro family back in 1933. She traveled to New York, Paris, Latin America and the Caribbean with them for 10 years. They made their recording debut with the RCA/Victor label which traveled to Cuba to record several 78 records with them between 1936 and 1937.

She was summoned to New York in 1943 by Mario Bauzá, when Machito was drafted into the army. She joined the orchestra as lead singer until Machito returned in 1944 and from then on the three shared the stage together until their untimely split in 1975. For 32 years they were on top of the charts and were the orchestra not only to beat, but to emulate. Not only did they travel the USA and the rest of the world, but they were leaders and reigned supreme during the heyday of the Palladium (where blacks, whites, Jews, Italians and Latinos, and celebrities would converge to dance), from 1946 until it’s closing. They performed as well at the Royal Roost, Birdland, the Park Palace, the Corso and the Apollo Theater on a yearly week-long gig --and at many other clubs and theatres in New York.

Graciela and the orchestra also performed on a yearly basis in Hollywood-- specifically at the Crescendo nightclub. Graciela and the band were also a favorite of the famous dee-jay ‘Symphony Sid’ who had them on his weekly program several times a year, and was broadcast coast to coast in the ‘1940’s and 50’s. They were also the summer headliners in the Catskill resort hotel, the Concord, for more than 20 years. They recorded milestone albums, for several labels throughout the years, including three of her solo releases “Esta es Graciela”, “Intimo y Sentimental”, “Esa Soy Yo, Yo Soy Así”, plus others.

In the 1980’s and early 90’s Graciela was an integral part of Mario Bauzá’s comeback and recorded several albums with him including his last three Grammy nominated albums for Messidor records. My personal favorite is "Afro-Cuban Jazz," released in 1986 on Caiman Records and produced by the late NY-based Argentinian pianist Jorge Dalto, who also shared the arrangements with Ray Santos and Paquito D'Rivera. It's a fantastic big-band LP, with an all-star line-up which includes Claudio Roditi, Victor Paz, Conrad Herwig, Ignacio Berroa, Daniel Ponce and Patato.

Upon Mario’s death in 1993, Graciela unofficially ‘retired’ but had been coaxed back to the recording studio or the stage on special occasions, including with trombonist Steve Turre on a fabulous rendition of “Ayer lo ví Llorar”, “Oye Mi Rumba” on Chico O’Farrill’s last CD and also dueted with percussionist Cándido Camero on the Grammy and Latin Grammy nominated CD “Inovidable”. Her stage appearances, in recent years, have been primarily in the tri-state area.

The last few years for Graciela has produced a wave of long time, well deserved accolades from such organizations as The International Latin Music Hall of Fame (1999, 2001), the Latin Grammy Lifetime Achievement Award (2007) and a number of other honors from different organizations. The United States government recognized her service in entertaining the troops during World War II.

Most recently Graciela’s 93rd birthday was celebrated at Lincoln Center’s Out of Doors festival along with the Caribbean Cultural Center where over ten thousand people jammed Damorsch Park to wish her well. Graciela performed five tunes for them to standing ovations. Needless to say she was overjoyed with the love that the public displayed for her. Since then she had been in the midst of recording a CD, writing her memoirs and filming a documentary on her groundbreaking, legendary life and career which spanned 77 years. Up until the end she was always a trooper, strong willed, forceful and full of life.