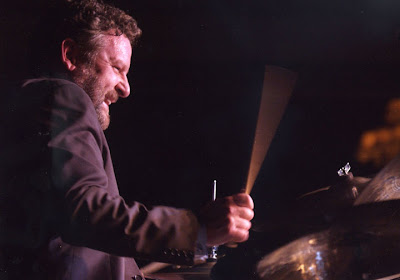 Anthony Wilson is one of the leading jazz musicians of his generation. Noted for his imagination, maturity, and depth, the guitarist/composer/arranger has recorded seven critically-acclaimed solo albums since 1997, including his Grammy-nominated self-titled debut, and "Power of Nine," which was included in The New Yorker's roundup of the top ten jazz albums of 2006. Wilson is captured at his most fluid and most relaxed on "Jack of Hearts," his newest recording. Leading a virtuoso trio - Larry Goldings on Hammond Organ, and either Jeff Hamilton or the legendary Jim Keltner on drums - in a high-energy and elegant collection of performances recorded direct-to-two-track analog, Wilson approaches the classic guitar-organ-drums trio format with reverence and a spirit of play and possibility.

A sensitive and gifted accompanist as well as a formidable soloist, Anthony Wilson has been an indispensable member of Diana Krall's quartet since he joined her in 2001 for a series of performances at Paris' Olympia Theater that were collected on the Grammy-winning CD/DVD "Live In Paris" (Verve), already widely considered a modern jazz classic. Recent recordings and performances with Willie Nelson, Mose Allison, Bobby Hutcherson, Madeleine Peyroux, Jessie Baylin, and Aaron Neville have continued to spotlight Wilson's growing artistry, musical flexibility, and improvisational authority. The producers Tommy LiPuma and Joe Henry have called on Wilson for his unique contributions to their projects; and Bennie Wallace, Larry Goldings, Harold Land, the Clayton-Hamilton Jazz Orchestra, and his father, the legendary composer/arranger/bandleader Gerald Wilson, are just a few of the well-respected artists with whom the gifted guitarist has forged fruitful, lasting partnerships.

Anthony Wilson's deep understanding of jazz tradition and his equal willingness to take risks are the hallmarks of his skillful, inspired work as a composer and arranger. Wilson won the Thelonious Monk Institute International Composers Competition in 1995, and since then has received numerous commissions for small- and large-scale original works. In 2008, his orchestral composition "Virgo" was commissioned by the LA Philharmonic Association and premiered at the Hollywood Bowl; and in 2009 his arrangement of Ivan Lins' "Love Dance" was featured on Barbra Streisand's "Love is the Answer." Every year since 2000, Anthony Wilson's considerable talents as a triple-threat guitarist/composer/arranger have landed him at the top levels of all three of those categories in Downbeat Critics' Poll.

Goldings was born in Boston, Massachusetts. His father was a classical music enthusiast, and Larry studied classical piano until the age of twelve. In high school he attended a program at the Eastman School of Music. During this period Erroll Garner, Oscar Peterson, Dave McKenna, Red Garland, and Bill Evans were prime influences. As a young teenager, Larry studied privately with Ran Blake andKeith Jarrett.

Larry moved to New York in 1986 to attend a newly formed jazz program under the leadership of Arnie Lawrence at The New School. During college he studied piano with Jaki Byard and Fred Hersch. While still a freshman, Sir Roland Hanna invited Larry to accompany him to a three-day private jazz party in Copenhagen. While there, Larry met jazz legends Sarah Vaughan, Kenny Burrell, Tommy Flanagan, and Hank Jones; and he also played piano in a band with Sarah Vaughan, Harry "Sweets" Edison, and Al Cohn. While still a college student, he embarked on a worldwide tour with Jon Hendricks and worked with him for a year. A collaboration lasting almost three years with jazz guitar legend Jim Hall followed.

In 1988, Larry began his development as an organist during a regular gig at a pianoless bar called Augie's (now Smoke) on New York's Upper West Side. He was featured with several bands, and his own trio with guitarist Peter Bernstein and drummer Bill Stewart got its start there. His own first release was Intimacy Of The Blues in 1991. He has released ten or more albums since then, and has appeared as a sideman on hundreds of recordings.

Larry's melodic style of organ playing has often been compared to that of Larry Young. On organ, Larry cites as his first inspirations the solo piano style of Dave McKenna "who walks his own bass lines better than anyone" and Billy Preston accompanyingAretha Franklin on "Bridge Over Troubled Water." Other influences were the Wes Montgomery records featuring Mel Rhyne and Jimmy Smith; Shirley Scott; Chester Thompson; Joe Zawinul; and Jack McDuff. Among jazz enthusiasts, Larry's organ trio with Peter Bernstein and Bill Stewart has been recognized for charting new ground, with the musicians' synergistic playing and their hard-swinging, yet very thoughtful, music.

Larry is a composer, arranger, and producer of music. His music reflects a wide listening palette, from Beethoven and Gabriel Fauré to contemporary artists like The Beatles, Randy Newman, and Bjork. His compositions have been recorded by Michael Brecker, Jack DeJohnette, Bob Dorough, Jim Hall, John Scofield, and Toots Thielemans, among others; and his songs and arrangements appear in the films Clint Eastwood's, "Space Cowboys," John Madden's "Proof," and, more recently, the Judd Apatowfilm, "Funny People." Larry also is a featured performer in the 2009 Clint Eastwood documentary, "The Dream's on Me," playing original arrangements of several classic Johnny Mercer tunes on piano and Hammond organ.

In addition to film, Larry's composing, arranging and producing credits include four albums with the vocalist Curtis Stigers in which one can hear their original co-writes as well as Larry's musical arrangements of a variety of contemporary songs and jazz standards. Larry's musical arrangements also can be heard on several James Taylor albums, including October Road, James Taylor at Christmas, One Man Band, and most recently, Covers.

In 2007, Larry Goldings, Jack DeJohnette and John Scofield, received a Grammy nomination in the category of Best Jazz Instrumental Album Individual or Group for their performance on the album, "Trio Beyond - Saudades" (ECM). The album captures their live performance in 2004 at Queen Elizabeth Hall in London. Its title is in reference to the musicians' collaboration that began as a tribute to the music of Tony Williams Lifetime group and has now moved beyond to include original works and other music in a similar vein.

Also, in 2006, 2007 and 2008, Larry toured the United States and Europe with James Taylor, as his One Man Band, a collaborative project that culminated in the joint CD/DVD release by the same name (Hear Music). The album, which was certified gold by the Recording Industry Association of America (RIAA), features an original composition by Larry entitled "School Song."
Jeff Hamilton

Originality is what versatile drummer Jeff Hamilton brings to the groups he performs with and is one of the reasons why he is constantly in demand, whether he is recording or performing with his trio, Oscar Peterson, Ray Brown, Laurindo Almeida, the Clayton Brothers or co-leading the Clayton/Hamilton Jazz Orchestra. Jeff's recording, "It's Hamilton Time" (Lake Street Records), received enormous airplay while reaching #5 on the Gavin national jazz radio chart. His trio's second release, "Jeff Hamilton Trio-Live" (MONS) was nominated by critics for best jazz recording in Germany in 1997. The trio's second MONS release is entitled, "Hands On." "Hamilton House-Live at Steamers" (MONS) is the trio's 2000 release. As well as recording and performing throughout the world, Jeff also teaches, arranges and composes.

Jeff has received rave reviews for his dynamic drumming. David Badham of Jazz Journal International stated in his review of the Clayton/Hamilton Jazz Orchestra's release, "Heart and Soul" (Capri): "This is one of the finest modern big band issues I've heard...This is undoubtedly due to Jeff Hamilton, a most driving and technically accomplished drummer."" Jeff is equally at home in smaller formats. He is an integral part of the Clayton Brothers and Herb Wong stated in his review of their release, "The Music" (Capri), in JazzTimes: "Always evident is...the colorful work of the rhythm section featuring...the sensitivity and sizzle of Jeff Hamilton's seasoned drums." Leonard Feather of the Los Angeles Times described Jeff and his work with Oscar Peterson as "the Los Angeles-based drummer whose intelligent backing and spirited solo work met Peterson's customarily high standards..." In his review of he Ray Brown Trio in the Denver Post, Jeff Bradley stated that Jeff "brought the crowd to its feet with his amazing hand-drumming, soft and understated yet as riveting and rewarding as any drum solo you've heard."

Born in Richmond, Indiana, Jeff grew up listening to his parent's big band records and at the age of eight began playing drums along with Oscar Peterson records. He attended Indiana University and later studied with John Avon Ohlen. Jeff was influenced by Gene Krupa, Buddy Rich, Mel Lewis, "Philly" Joe Jones and Shelly Manne. In 1974, he got his first big break playing with the New Tommy Dorsey Orchestra. He then joined Lionel Hampton's Band until 1975 when he, along with bassist John Clayton, became members of the Monty Alexander Trio. He attained a childhood goal in 1977 when he joined Woody Herman and the Thundering Herd, with whom he made several recordings. In 1978, he was offered the position vacated by Shelly Manne in the L.A.4 with Ray Brown, Bud Shank and Laurindo Almeida. He recorded six records with the LA4, some of which featured his own arrangements and compositions.

From 1983 to 1987, Jeff performed with Ella Fitzgerald, the Count Basie Orchestra, Rosemary Clooney and Monty Alexander. Jeff began his association with the Ray Brown Trio in 1988 and left in March 1995 to concentrate on his own trio. From 1999-2001, the Clayton/Hamilton Jazz Orchestra was named the in-residence ensemble for the Hollywood Bowl Jazz series. Jeff became part-owner of Bosphorus Cymbals in 2004. He is now one of 3 owners of Bosphorus Cymbals. Email MVos@Bosphoruscymbals.com for more information. The Los Angeles Jazz Society named Jeff and his musical partner, John Clayton, musicians of the year for 2006. A banquet in their honor was held at the Los Angeles Marriott Downtown Hotel. Jeff has often touring with his own Trio, the Clayton-Hamilton Jazz Orchestra and Diana Krall, with whom he recorded the DVDs "Live in Paris" and "Live in Rio" (Eagle/ST2) and performed live for several years, till mi-2009, when he was replaced by drummer Karriem Riggins.