CD of the Day - "Antonio Adolfo & Carol Saboya: Lá e Cá/Here and There" 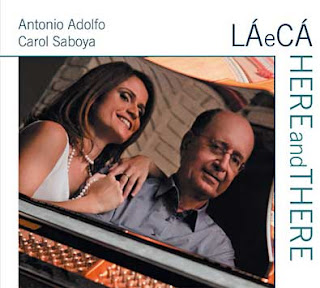 Jazz and Brazilian music have shared a rich interactive history for the last half-century.
Pianist/composer Antonio Adolfo was one of those young Rio players in the early 1960s who found himself captivated by those new sounds, both at home and abroad, having debuted during the bossa nova era as the leader of the Trio 3-D. On his new CD, "Lá e Cá" (Here and There), released today, April 20, on his AAM label, Adolfo juxtaposes his own compositions and three of Jobim's with jazz and American Songbook classics to create a showcase for this alluring musical synthesis and for Adolfo's self-described obsession with Brazilian phrasing. His vocalist daughter Carol Saboya is featured on five tracks - one in Portuguese ("Sabiá") and the others in English ("All the Things You Are," "A Night in Tunisia," "Time After Time," "So in Love").

Throughout "Lá e Cá," Adolfo applies his Brazilian phrasing to American songs such as "Easy to Love" ("I am a passionate admirer of Cole Porter's music"), "Lullaby of Birdland" (performed in a medley with Jobim's "Garoto," originally titled "Choro" on the "Stone Flower" masterpiece), and Jerome Kern's "All the Things You Are." Jobim's "Nuvens Douradas" (from "Matita Perê") is paired with Porter's "Ev'ry Time We Say Goodbye."

"Time After Time" is inspired by Chet Baker's 1954 recording, which enthralled Adolfo and other Brazilian musicians. "It's safe to say that his vocal interpretations have influenced an entire generation of musicians in Rio/Brazil," states the pianist. Adolfo's own work is represented by two early compositions, "Cascavel" and "Toada Jazz (O Retirante)," and the more recent "Minor Chord."

"I love performing with Carol," says Adolfo. "She's very jazz-oriented, the type of singer musicians like to play with." In addition to his prolific work as a pianist, composer, and arranger, Adolfo, 63, continues to be a leader in music education. The Centro Musical Antonio Adolfo in Rio and a new experimental Brazilian music school in Hollywood, Florida, where he resides, are a big part of his current professional life.

Saboya, 35, also teaches at the Centro, in Rio, and maintains her own recording career, which began with an appearance on Sergio Mendes's Grammy-winning "Brasileiro" (1992). Carol's CDs include the Prêmio Sharp award-winning "Dança da Voz," and "Janelas Abertas" (a session with guitarist Nelson Faria) as well as "Sessão Passatempo," "Presente," and the recent "Chão Aberto," all released in Brazil. Her "Bossa Nova" and "Nova Bossa" were made for JVC Japan.
Posted by Arnaldo DeSouteiro at 6:21 AM