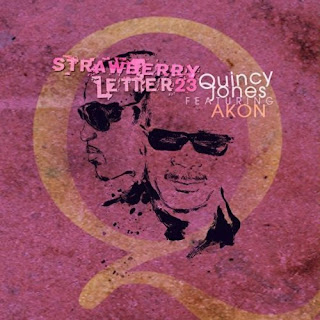 After 7 years in the making, Q's new album "Soul Bossa Nostra" is scheduled to release this summer (probably June 2 in the USA and Japan) on the Interscope label, distributed by Universal. It includes remakes of some of Quincy's hits like "Ironside," "Everything Must Change" (from the "Body Heat" album and included on Arnaldo DeSouteiro's compilation for Verve, "The Soul Jazz Grooves of Quincy Jones: Summer in the City"), "Soul Bossa Nova" (featured on the first volume of DeSouteiro's "A Trip to Brasil" series) and "Give Me The Night," made famous on a Quincy-produced George Benson album for Warner.

Usher, Robin Thicke, LL Cool J, Trey Songz, Tyrese and Tevin Campbell joined forces on the 1990 No. 1 R&B hit "The Secret Garden." In a release announcing "Q: Soul Bossa Nostra," Jones stated, "Each artist picked a song that resonated with them for different reasons. I am honored that everyone wanted to be a part of this celebration of these songs. They all made them their own and knocked them out of the park."

For the first single off the record, Quincy Jones selected Akon's rendition of Shuggie Otis' "Strawberry Letter 23" - a song made famous by the Brothers Johnson in 1977 on the album "Right on Time," produced by Quincy for the A&M label. Quentin Tarantino also featured the song in his film "Jackie Brown" in 1997.

About recording the song, Akon was quoted as saying, "When Quincy called and told me about this album, I said you have to let me do "Strawberry Letter 23" and the funny thing is that's the song he was thinking about already. We brought a new modern feel to this classic and I think everyone's going to really enjoy it."

To download the song on iTunes, click on THIS LINK. To stream the song, visit Quincy's Myspace Page.