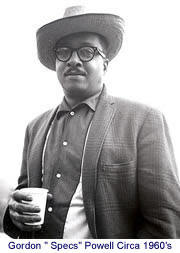 The drummer Specs Powell died September 15th in San Marcos near San Diego at the age of 85. Powell started his career as a pianist, but became known mainly as a drummer and as such played on New York's 52nd Street since the early 40s. In 1943 he was hired by CBS as one of the first Black musicians to play for a national network. He also performed with Benny Goodman, Red Norvo or Charlie Parker, but also with Billie Holiday. He stayed with CBS until 1972, then moved to the Virgin Islands before retiring to San Diego. Obituary: San Jose Mercury News .
According to Marin Cohen, from LatinPercussion:
"If it weren't for the genius of Specs Powell, there might never have been an Latin Percussion Here is the story of how he helped shape my career and the use of percussion in all types of music.

When I met and became friends with Specs in 1963, he was playing drums on the Ed Sullivan show, and I was being heavily influenced by the Latin Jazz I was hearing at the Palladium ballroom. As my dislike for my job grew, my desire to be a part of the music business increased. It soon became clear to me that the Latin music business, as I knew it, could not provide me with the opportunities I sought. After confiding this to Specs, he advised me to "get out of the dance hall and into the recording studio" where the real money was. Recognizing that Specs was a shrewd and successful businessman, as well as a consummate musician, I knew that I had been given good advice.

Specs also advised me to contact drummer, Bob Rosengarden, who was making a name for himself playing bongos and Brazilian percussion in the recording studios. Bob made it clear to me that studio musicians required improvements for their instruments that I might be able to provide.

Specs’s first challenge to me was to create a bracket for mounting bongos on a stand. Now, I had watched the percussionists at the Latin dance hall and knew that they put the bongos between their legs, not on a stand. Specs explained that often, while playing a gig, he quickly had to switch from vibes to bongos and that there was no time to put the bongos between his legs. Having the bongos already attached to a stand with a bracket would alleviate this problem. This made perfect sense to me, so I set about devising one. My efforts resulted in the creation of the first bracket, which would enable the bongo owner to install the bracket on a bongo and then attach it to a stand with a 3/8-inch diameter rod attached to it.

When I met with Specs recently, at his home in California, to interview him and reflect on his rich career as a jazz drummer, he told me that my innovation revolutionized percussion. He may have been right. When you are watching the percussionist with Earth Wind and Fire or the percussionist with Mary J. Blige playing bongos on a stand, along with a complete percussion arsenal, remember that it was made possible by the vision of Specs Powell. "
Posted by Arnaldo DeSouteiro at 10:31 AM