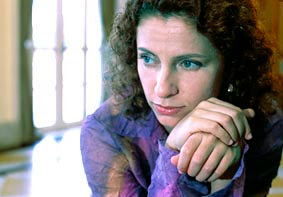 The title Cool Bossa Struttin' speaks volumes about Paula Faour's musical outlook. "Cool Struttin'," which opens this CD, is a funky number by late hard bop pianist Sonny Clark — and by calling her first album as a leader Cool Bossa Struttin', Faour is acknowledging the fact that she owes a creative debt to both the United States and her native Brazil. She is a jazz pianist with a strong Bill Evans influence, but Brazilian rhythms have also had a major impact on her playing (which is swinging yet lyrical). And quite appropriately, Faour turns her attention to both Brazilian and American songs on this 2002 session — Brazilian as in two Jobim songs ("O Grande Amor" and the lesser known "Tereza, My Love") and Eumir Deodato's "Mr. Tom," American as in Miles Davis' "Blue in Green," Jimmy Van Heusen's "Here's That Rainy Day," and Thelonious Monk's "Well, You Needn't." The latter has been recorded countless times since Monk unveiled it in the '40s, and much to her credit, Faour manages to bring something different to the tune — rarely has "Well, You Needn't" received such a Brazilian-minded makeover. Faour also interprets a song that didn't come from either the U.S. or Brazil, but rather, England: the Beatles' "Fool on the Hill," which works well as instrumental Brazilian jazz. Most of the time, Faour leads an acoustic piano trio that employs Manuel Gusmão on bass and the great Dom Um Romão on drums, but a guest will occasionally join the trio. One is Brazilian singer Ithamara Koorax, who is characteristically expressive on the standard "Recado Bossa Nova." Faour was 25 when Arnaldo DeSouteiro produced this album, which is a promising and enjoyable debut for the Brazilian pianist.
Posted by Arnaldo DeSouteiro at 2:47 PM